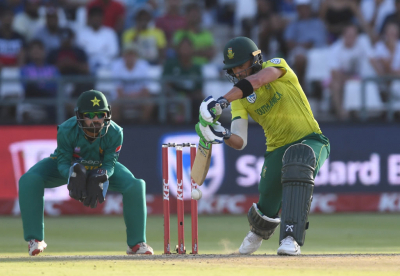 South Africa’s collective decision to pick a starting side for the fourth KFC T20 International on Friday, with just four frontline batsmen,was a very bad one.

It’s one thing to experiment with the composition of the starting team, quite another to throw out the fundamentals of a team’s structure to the extent that just Aiden Markram, Janneman Malan, Rassie van der Dussen and Heinrich Klaasen were chosen as frontline batsmen. It meant George Linde came in at no.5, and while his form with the bat has been good both domestically and for the national team, that position is definitely one and maybe two spots too high.

Boucher might have been an icon in his playing days but he is finding this coaching gig a little bit harder. The T20I series loss to Pakistan was his fourth on the trot as Proteas head coach. Added to this, he’s been in charge of 12 series and lost eight of them.

Away from the results, his reasoning for leaving out Kyle Verreynne doesn’t make much sense considering Verreynne’s form compared to Wihan Lubbe and Pite van Biljon, who both got game time in the T20I series.

It’s hard to gauge whether getting rid of Boucher is the right call or not especially in a World Cup year. However, his tenure up until this point has provided very few positives. With the T20 World Cup later this year, the lack of a tangible and coherent plan is concerning.

With captain Temba Bavuma out of action and a host of star players in India, the lack of leadership was evident throughout the series as the Proteas struggled with their 'out-cricket'.

Stand-in captain Heinrich Klaasen’s approach came across as rigid and formulaic. His job was obviously made harder without the likes of Kagiso Rabada, Anrich Nortje and Lungi Ngidi as options. Also, one of the Proteas’ most experienced bowlers, Andile Phehlukwayo, did not bowl at all in the second and third T20Is – this decision did not make any sense. The 25-year-old is struggling for form and the fact that he did not bowl in two consecutive matches will almost certainly make him feel disillusioned.

They also missed Bavuma, his captaincy of the Lions and handful of international matches, which indicate a willingness to try new things (ie Markram bowling death overs in the ODI series) if plan A does not work. Unfortunately, the Proteas’ lack of creativity and execution while fielding hurt them when trying to defend totals.

Depth in bowling a concern

The Proteas’ three premier fast bowlers are all on IPL duty, so the series was a chance for the reserves to shine. Unfortunately, it did not pan out that way. On batting friendly tracks on the Highveld, Lizaad Williams, Sisanda Magala and Beuran Hendricks all struggled when faced with the aggressive Pakistan batters. All three quicks went for over nine runs per over through the course of the series. Williams did pick up seven wickets while Magala and Hendricks got three each.

Magala, who deservedly got his call-up after years of outstanding death bowling for the Warriors and Lions, struggled to adapt to international cricket and bowled a lot of no-balls. He showed glimpses of his skill set but not consistently so. He deserves another crack at internationals, as does Williams; one series is not enough to judge a player. On the other hand, time in the Proteas set-up might be coming to an end for Hendricks.