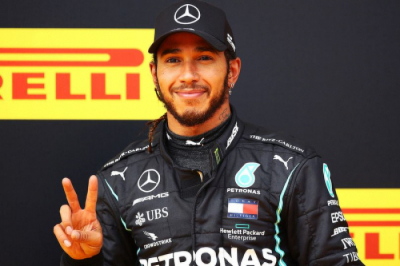 Briton Hamilton was just 0.035 seconds clear in the Mercedes as Mexican Perez, in only his second race for Red Bull, beat team-mate Max Verstappen.

Charles Leclerc put the Ferrari fourth, while Valtteri Bottas was only eighth in the second Mercedes.

McLaren's Lando Norris had his fastest lap time deleted for exceeding track limits and fell from second to seventh.

It was a bitter blow for the Englishman, who had looked fast all session and appeared to have a chance of qualifying among the Mercedes and Red Bulls.

He was no more than a foot outside the track at the fast Piratella left-hander, where countless drivers have had lap times deleted through the weekend.

And while Hamilton being on pole might appear commonplace, it was a clear surprise to the Mercedes team judging by the exchange he had with race engineer Peter Bonnington on team radio afterwards, as both expressed incredulity at beating the Red Bulls.

"I definitely didn't expect us to be ahead of two Red Bulls," Hamilton said. "They have been so quick this weekend. They had 0.6secs on us at some times. But the car was already feeling a lot better from this weekend.

"Mad respect for the hard work from the team to narrow down the window."

Hamilton's pole marked a significant shift in fortunes at the front since the first race of the season, when the Red Bull was clearly the quickest car and Verstappen was on pole by 0.4secs.

Twitter
More in this category: « South Africa vs. Pakistan T20I series: Talking Points. Norwich City promoted back to Premier League after just one season away. »
back to top