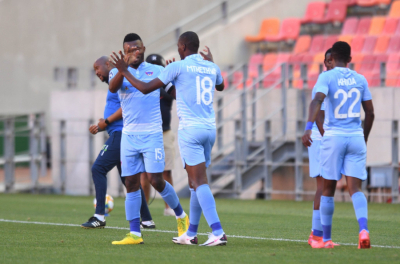 Sandile Mthethwa punished Callies, who committed their first error of the game against the run of play following a defensive error from Oupa Moeketsi.

In a first half characterised by niggle and lack of rhythm it was the First Division campaigners who edged the chances.

The best opportunity for Chippa came when Thabiso Lebitso was put through early and seemed not to realise centre-back Nathaniel Tladi had played him onside, hesitating and taking the ball away from goal.

Callies went into the half-time break the happier of the two sides as their high-press make Chippa look vulnerable and the Chilli Boys were also unable to exert sustained periods of attacking play against their opponents who play in the National First Division.

Callies came to life after the interval and successfully put the Chilli Boys on the back foot for much of the game.

However, just past the hour mark it was Chippa United who found the back of the net against the run of play. A poor clearance from the Callies defence saw the ball fall favourably for Mthethwa, who maintained his composure and finished with a stunning volley for a 1-0 lead.

Though lady luck has not been on the side of Chippa much in the league recently, it has been helping them in the Nedbank Cup as they have a chance to now add some silverware to their cabinet in what has been a frustrating season for them.

They will either be up against TTM or Mamelodi Sundowns who play in the second semi-final tomorrow in the final.

Here is how the teams lined up.

Twitter
More in this category: « Norwich City promoted back to Premier League after just one season away. Record-breaking Musiala goals send Bayern Munich closer to title. »
back to top