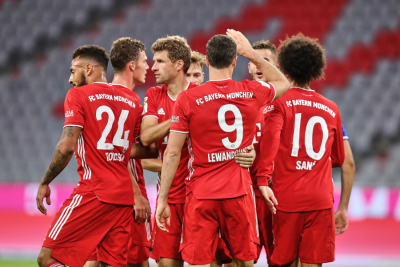 Teenager Jamal Musiala scored twice in the first half to steer Bayern Munich to a nervous 3-2 victory at third-placed VfL Wolfsburg on Saturday to move seven points clear at the top of the Bundesliga with five matches left to play.

Three days after their Champions League quarter-final elimination by Paris St Germain, the Bavarians made almost certain of their first silverware of the season after RB Leipzig stumbled to a goalless draw against Hoffenheim on Friday.

In an entertaining game, teenager Jamal Musiala and Eric Maxim Choupo-Moting put Bayern 2-0 up after 24 minutes.

Wout Weghorst pulled a goal back in the 35th minute only for Musiala to head in his second two minutes later.

Maximilian Philipp's sweet half-volley reduced the deficit again in the second half but Bayern held on.

Bayern keeper Manuel Neuer crucially denied Weghorst an equaliser with a smart save in the 66th minute.

The Wolfsburg striker had been flagged offside but replays suggested that decision would have been overturned by the video assistant referee had his finish beaten Neuer.

Bayern, on track for a record-extending ninth straight league crown, are on 68 points, with RB Leipzig in second place on 61.

Wolfsburg held on to third spot on 54 points despite their defeat after Eintracht Franfurt's 4-0 loss to Borussia Monchengladbach that left them a point behind the Wolves in fourth.

Last-placed Schalke slumped to a 4-0 loss at Freiburg that all but sealed their relegation. The Royal Blues are 13 points behind the relegation playoff spot occupied by Hertha Berlin with five games left.