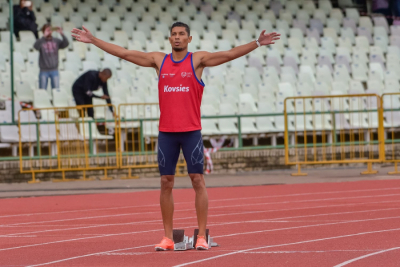 The 28-year-old clocked 20.38 seconds on a chilly night at the University of Pretoria -- 0.14 sec outside the minimum time needed to compete in Japan.

Van Niekerk has yet to indicate whether he will attempt to qualify for the 200 and 400m events at the Tokyo Olympics, or concentrate on the longer distance.

It was his final race in South Africa before heading to the United States, where he will work with new coach Lance Brauman in Florida.

He was scheduled to leave South Africa this week, but delays in obtaining travel documents allowed him to compete at the national championships, held behind closed doors due to the coronavirus pandemic.

Van Niekerk is switching to Brauman because long-time coach Ans Botha is 79 years old and no longer has the physical mobility to travel with the Olympic champion.

"Mentally, I was not there. I had intense sessions on Monday and Tuesday, building toward the future, so the body was quite beaten up," he said after his 200m triumph.

"I was just trying to come out of the championships healthy. That is what I did and it was a good feeling to win again.

"My mentality is way beyond that (winning the national 200m final). My goal is to run against the best in the world.

"A title is a good step forward knowing where I have come from, but mentally my mind is set at being the best in the world.

"Being the best in South Africa is something I am grateful for, but it is not something where my heart and mind is at."

A year after winning 400m gold and breaking the 17-year record of Michael Johnson with a time a 43.03 sec at the 2016 Rio Games, Van Niekerk injured his knee playing celebrity touch rugby.

In the women's 200m final, Justine Palframan earned gold in 23.64, holding off a challenge from Shirley Nekhubui who finished second in 23.77.

"It's always good to add to the medal tally," Samaai said.

"This is my third time being national champion and I want more medals and titles. If I keep working at it and I can stay fit and healthy, I know I'll get there and achieve my goals."

In the men's shot put, Kyle Blignaut and Jason van Rooyen continued their domestic rivalry in a hard-fought battle.

Blignaut ultimately came on top to win the final with a 20.82m heave, with Van Rooyen settling for the runner-up spot (20.60m).

"I wanted the Olympic qualifying standard (21.10m) but I'm very happy with the win and my first SA senior title," said Blignaut, a former World U20 Championships gold medallist.

"It was a bit cold, but no excuses. I will try to get the Olympic qualifier at an international meeting."

On the track, Wenda Nel did well to secure her ninth national title in the women's 400m hurdles event.

"I didn't execute the last hurdle as planned, but I did not compete for 20 months and I can feel the rust is starting to come off, so I'm very happy with the win," Nel said.

Le Roux Hamman dipped under 50 seconds to grab the gold medal in the men's 400m hurdles event, reclaiming the title he won in 2017.

"Times can be taken away from you but not titles, so I'm very happy," Hamman said.

"It was cold today, which influences the performances, but it's nice to come back and win again."

In the flat 400m contests, Deline Mpiti caused an upset to win the women's final in a personal best 52.78, with SA U20 champion Amy Naude finishing second in 53.65, while Zakithi Nene earned gold in the men's final in 45.54.

Fredriech Pretorius earned gold in the decathlon with 7 510 points and Shannon Verster won the heptathlon with 5 247 points.

Twitter
More in this category: « Cricket South Africa (CSA) is on the verge of finally imploding. Max Verstappen wins dramatic race with Lewis Hamilton recovering to second after error. »
back to top