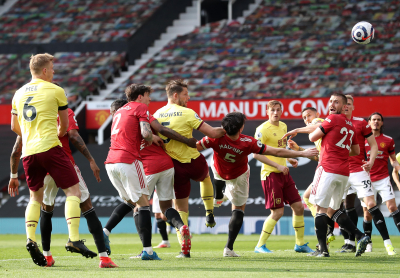 The 19-year-old watched his thumping opener after the break cancelled out moments later when James Tarkowski rose above Harry Maguire to level.

But Greenwood scored his second with six minutes remaining with a fierce left-footed strike that deflected beyond goalkeeper Bailey Peacock-Farrell at the front post.

Edinson Cavani then tapped in from close range in stoppage time to wrap up the victory at Old Trafford.

The visitors' direct attacking play had caused United problems of their own and they had the ball in the net after 14 seconds.

Chris Wood beat goalkeeper Dean Henderson to a floated delivery on the edge of the penalty area and headed into an empty goal, only to be correctly flagged offside.

It means Ole Gunnar Solskjaer's side are now eight points behind leaders City in second place with six games to play, while Burnley remain 17th and six points above the relegation zone.

Twitter
More in this category: « TTM shock Mamelodi Sundowns to reach first ever cup final. UEFA furious at 12 major clubs for signing up to breakaway plans. »
back to top