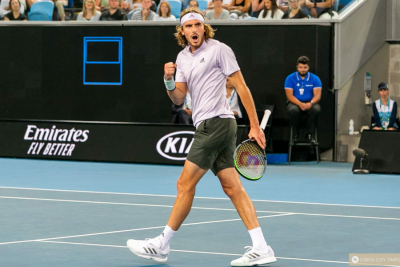 Tsitsipas, who did not drop a set throughout the competition, needed just one hour 11 minutes to win a one-sided match against the Russian.

"I had an unbelievable week," said the 22-year-old. "I am overwhelmed by so many different emotions and nostalgia.

"I would consider it as the [best] week of my life so far."

Tsitsipas took control of both sets by breaking 23-year-old Rublev, who beat Rafael Nadal in the quarter-finals, early on.

"It is the best thing winning my first Masters 1000 and it is even more special doing it here on home soil in Monte Carlo [where he lives] and doing it on clay, which is my favourite surface."

Earlier on in Monte Carlo, Britain's Dan Evans and Neal Skupski missed out on a maiden doubles title together as they lost the final to Croatian second seeds Nikola Mektic and Mate Pavic.

Playing in only their second tournament as a partnership, Evans and Skupski were beaten 6-3 4-6 10-7.

They lost the Miami Open final to Mektic and Pavic earlier in April.

The victory was the Croatians' fifth ATP Tour title from six finals and they have lost just three matches this year.

Twitter
More in this category: « UEFA furious at 12 major clubs for signing up to breakaway plans. Shikhar Dhawan makes 92 in Delhi Capitals' win against Punjab Kings - IPL. »
back to top