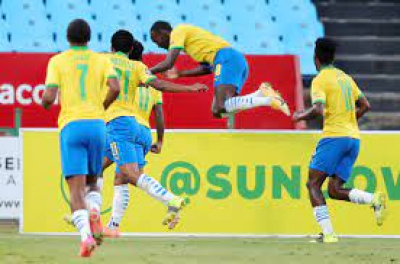 Mamelodi Sundowns were held to a 0-0 draw by AmaZulu FC in the DStv Premiership match at the Jonsson Kings Park Stadium in Durban.

The draw saw unbeaten Sundowns remain at the top of the league standings - six points above second-placed Amazulu, with the former having two games in hand.

Morena opted to volley the ball and the Bafana Bafana international hit the side-netting nine minutes into the encounter as Usuthu survived a scare.

AmaZulu grew in confidence as the match progressed and Rushine De Reuck had to make a well-timed interception to deny Augustine Mulenga.

However, Sundowns regained control of the game towards the half-hour mark with Peter Shalulile unleashing a snap-shot which sailed wide of the target.

The score was 0-0 at the interval following a first half which had few clear-cut chances.

The Brazilians dominated the match after the restart and goalkeeper Veli Mothwa became a busy man between the sticks for Usuthu in the opening 15 minutes of the top-of-the-log encounter.

With their side pushing for the opening goal, Sundowns co-coaches Manqoba Mngqithi and Rhulani Mokwena introduced Aubrey Modiba and Gift Motupa in the 73rd minute.

The duo nearly made an immediate impact as Motupa set-up Modiba, who was denied by Mothwa in the 77th minute and Shalulile poked the ball wide of the target from the rebound.

AmaZulu were then able to contain Sundowns in the dying minutes of the game and the match ended in a 0-0 stalemate.

Meanwhile Black Leopards were unable to boost their survival hopes in the DStv Premiership after dropping points against Stellenbosch FC.

Twitter
More in this category: « Sundowns face a litmus test with AmaZulu enjoying their best form. SA men’s Olympic football team get tough draw for Tokyo games. »
back to top