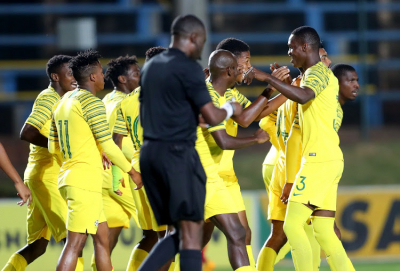 South Africa under-23 Men’s national team have been drawn against hosts Japan, France and Mexico for the upcoming Tokyo Olympic football tournament.

The virtual draw was held in Zurich, Switzerland on Wednesday morning and the Olympics football tournament is scheduled to run from 22 July 2021 to 7 August 2021.

The Olympic tournament was postponed from last year due to the Coronavirus pandemic that caused havoc to the entire sporting calendar.

South Africa is pitted in Group A and face hosts Japan on 22 July at the Tokyo Stadium, before playing France at Saitama stadium on 25 July. David Notoane’s side then round off their group stage matches with another tough encounter against Mexico at the Sapporo Dome on July 28.

Notoane admitted soon after the draw that his side was in a very tough group but said he was relishing the challenge and was ready to give it a go.

"We now know the identity of our opponents. It is tough draw but a good draw and I am very excited. This is a group in which preparations are critical. If we apply ourselves fully, we can get to the knock-out stages," said Notoane who added that it was a plus for his side to be playing the opening game at the Tokyo Stadium.

Speaking ahead of draw, Tokyo 2020 President Seiko Hashimoto heaped praise to FIFA President Gianni Infantino and everyone involved for their efforts in ensuring that the Tokyo Olympic football draw finally took place.

"I would like to congratulate Gianni Infantino, President of FIFA and everyone involved for their hard work and cooperation. I would like to thank your efforts that we are able to welcome the Tokyo 2020 Olympic Football Tournament Draw today," said Hashimoto.

"We now have less than 100 days to go until the opening of the Olympic Games Tokyo 2020 and I would like to express my respect and thanks to all athletes and their staff, who despite the COVID-19 situation have been training hard and preparing every day for these games.

"I would like the Tokyo 2020 Games to act as a shining light of hope for people all over the world," Hashimoto concluded.

Twitter
More in this category: « Sundowns keep unbeaten record intact with a goalless draw against Amazulu. Pirates held to a goalless draw by ES Setif in Confederation Cup. »
back to top