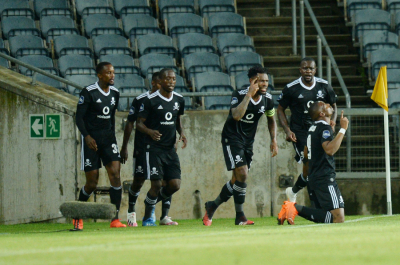 Josef Zinnbauer handed a start to Siyabonga Mpontshane ahead of Wayne Sandilands while Thulani Hlatshwayo returned to the defence with the young Thabiso Sesane dropping to the bench.

Deon Hotto became a constant thorn in the side of Setif's defence from the first whistle and the maiden goalscoring opportunity of the game fell for the Namibia international.

The speedy attacker was sent through on goal by Siphesihle Ndlovu's long ball and he unleashed a first-time shot which was easily saved by Setif goalkeeper Sofiane Khedairia.

Pirates were forced to make an early change as Wayne Sandilands replaced Mpontshane, who had sustained an injury after coming out to clear the ball before Lomotey could pounce and score.

Khedairia was called into action on the stroke of half-time and he made a comfortable save from Makaringe's curling cross and the score was 0-0 at the interval.

Pirates should have been 1-0 up two minutes into the second-half, but somehow Tshegofatso Mabaso missed a sitter from close range with only Khedairia to beat and the ball went over the crossbar.

The Black Eagles then apply some pressure on the Buccaneers which saw Sandilands make two routine saves with the former Bafana Bafana international denying Mohamed Amoura and Abderrahim Deghmoum.

Sandilands was a busy man as he pulled off two great saves from Setif captain Akram Djahnit's well-taken free-kicks which Pirates conceded after fouling the troublesome Amoura twice.

The Buccaneers were under pressure in the closing proceedings and the last chance of the encounter fell for Ibrahim Hachoud, who failed to keep his header on target and ultimately the game ended in a 0-0 draw.

The result saw Pirates extend their lead to three points at the top of the group standings with one game left and they will qualify for the quarter-finals if Libya's Al Ahli Benghazi fail to defeat Nigerian giants Enyimba on Wednesday night.