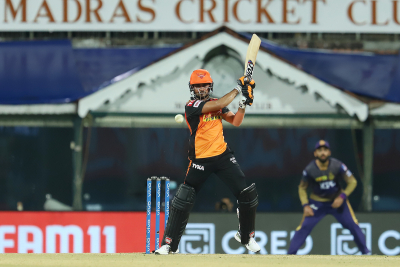 Three-time champions Chennai Super Kings moved to the top of the Indian Premier League table with an 18-run victory over Kolkata Knight Riders.

Chennai made 220-3 from their 20 overs with Faf du Plessis making an unbeaten 95 and Ruturaj Gaikwad 64.

Kolkata slumped to 31-5, with Deepak Chahar taking 4-29 from four overs.

They recovered to leave 28 needed from two overs, with Andre Russell making a 21-ball 50, Dinesh Karthik 40 and Pat Cummins 66* but Chennai hung on

Chennai, who began the tournament with a defeat before back-to-back victories, started well with Du Plessis and Gaikwad sharing 115 for the first wicket.

Gaikwad was under pressure after scoring just 20 in his first three innings, but the pair played with freedom and hit 15 fours and eight sixes between them.

There were also useful contributions from Moeen Ali, who scored 25 off 12 balls, MS Dhoni who struck a eight-ball 17, while Ravindra Jadeja hit his only ball for six.

Varun Chakravarthy was the pick of the KKR bowlers taking 1-27 from his four overs, but the rest struggled with Australia quick Cummins recording the worst bowling figures in this season's tournament in going for 58 in four wicketless overs.

KKR, who are captained by England skipper Eoin Morgan, had played their three previous games in Chennai, where the pitch has been slow and difficult to score, while Mumbai has had plenty of extra pace and bounce, and they struggled to adjust with ball and bat.

Chahar found plenty of swing movement - both in and out - to remove Shubman Gill, Nitish Rana, Morgan and Sunil Narine before Russell combined with Karthik to put on 81 and drag KKR back into the game

When Russell was bowled, the ball after reaching his half-century, after misjudging a ball he was trying to leave for a wide, Karthik and Cummins put on 34 from 22 balls, before Karthik was out lbw to Lungi Ngidi for 40.

Cummins continued to attack, hitting Sam Curran for 30 in the 16th over, and brought up his half-century off 23 balls.

Curran recovered to concede just eight from the 19th over, to leave 20 required from the final over but Prasidh Krishna was run out off the first ball looking to get back for a second run.

Chennai go top - until at least Thursday when the unbeaten Royal Challengers Bangalore play - while KKR are sixth.

Twitter
More in this category: « Tottenham Hotspur rally to beat Southampton on Bale, Son goals. Pep Guardiola terms ESL a closed chapter after a win against Aston Villa. »
back to top