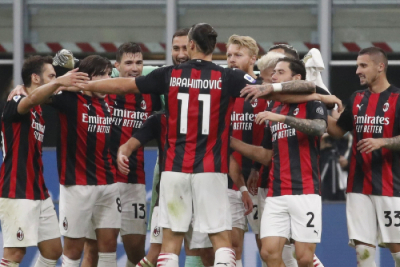 AC Milan striker Zlatan Ibrahimovic has signed a one-year contract extension that will keep him at the club beyond his 40th birthday.

Ibrahimovic joined Milan for a second time in December of 2019.

He extended his initial six-month contract for one year in August of 2020 and has now put pen to paper again.

Ibrahimovic, who helped Milan to their last Serie A title in 2011, is the club's top scorer with 15 goals in 17 games having missed others through injury and illness.

The former Manchester United, Paris Saint-Germain and Barcelona forward's current deal had run until the end of the season.

The Swede returned to the national team last month, more than five years after calling time on his international career.

Milan are targeting a return to the Champions League for the first time since the 20113-2014 season.

Meanwhile, negotiations between Milan and Hakan Calhanoglu over a contract extension have stalled due to the midfielder's wage demand.

The Turkey international is out of contract in the summer and Sky in Italy are reporting Juventus would be interested in signing him on a free transfer.