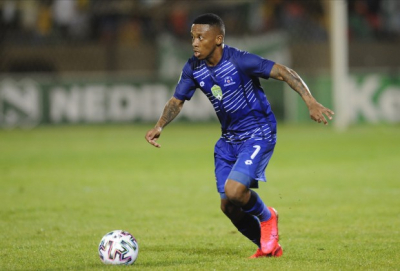 Baroka FC held Maritzburg United to a 1-1 draw in the DStv Premiership match at the Harry Gwala Stadium on Friday evening.

The result saw Bakgaga Ba Mphahlele and the Team of Choice remain eighth and 13th respectively on the league standings.

Team of Choice controlled the match from the first whistle, but Bakgaga Ba Mphahlele were able to contain the hosts in the opening stages.

However, Maritzburg upped the tempo after the 20th-minute mark and they managed to break the deadlock through Thabiso Kutumela.

Kutumela curled the ball into the top right corner to hand Maritzburg a 1-0 lead in the 25th minute with Daylon Claason grabbing an assist.

The visitors pressed the Team of Choice and they levelled matters when Evidence Makgopa netted his second goal in three matches to make it 1-1 in the 33rd minute.

Maritzburg tried to restore their lead, but Ryan Rae's headed effort was saved by Baroka goalkeeper Oscarine Masuluke in the 38th minute and the score was 1-1 at the interval.

The hosts continued to push for their second goal of the match after the restart with Puleng Tlolane unleashing a shot which went narrowly wide of the target in the 57th minute.

Baroka head coach Matsimela Thoka decided to introduce Thamsanqa Masiya as the visitors looked to snatch a late winning goal inside the final 13 minutes of the game.

However, Bakgaga Ba Mphahlele were reduced to 10 players in the 83rd minute after Ananias Gebhardt was shown a straight red card for a late foul on Dusan Stevic.

Despite being numerically disadvantaged, Baroka defended very well in the dying minutes of the match and ultimately the game ended in a 1-1 draw on the night.