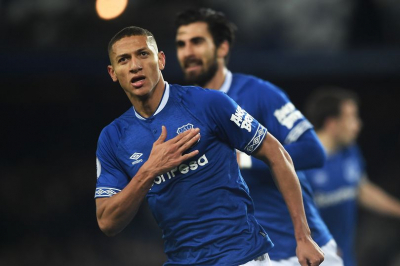 An absolute howler from Arsenal's Bernd Leno gifted Everton a crucial win in their bid for a Champions League place - as Gunners fans protested against the club's owners outside.

Over 1,000 Arsenal supporters gathered outside Emirates Stadium to show their anger about Stan Kroenke's role in the failed European Super League.

Fireworks could be heard outside the stadium shortly after kick-off.

The protests follows similar ones by Chelsea fans on Tuesday.

The goal came when Everton forward Richarlison tried to roll a pass across the six-yard box. Leno should have scooped it up, but the ball slipped through the Arsenal keeper's hands, hitting his leg on the way in.

That was a rare moment of goalmouth action on the night as Everton moved to within three points of the top four.

Gylfi Sigurdsson came closest before that when his 30-yard free-kick hit the bar.

Arsenal were awarded a penalty in the second half after Richarlison nicked Dani Ceballos - but it was overturned by the video assistant referee for an offside in the build-up.

Leno also came up for a late corner but could not make amends for his costly error.

The win gives the struggling Gunners 46 points from 33 matches, while Everton have 52 with one fewer game played.

Twitter
More in this category: « Japan declares virus emergency in Tokyo as Olympics edge closer. Tiger Woods posts photo of himself using crutches weeks after horrific crash. »
back to top