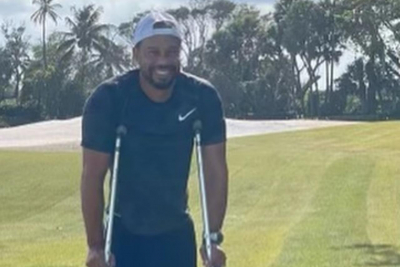 Tiger Woods has posted a photo of himself smiling on a golf course - the first time he has been pictured since he was seriously injured in a car accident in February.

The 15-time major champion underwent surgery on open fractures to his lower right leg and further injuries to his foot and ankle following the crash.

Woods had a big smile on his face as he stood on the course next to his dog.

"My course is coming along faster than I am," Woods wrote on Instagram.

"But it's nice to have a faithful rehab partner, man's best friend."

Woods' car left the road at about 84-87mph and flipped several times during the accident in California.

The former world number one, 45, and 2019 Masters champion, who the LASD said was "fortunate to be alive" following the incident on 23 February, was the sole occupant in his vehicle and was wearing his seatbelt.

Twitter
More in this category: « Arsenal lose to Everton after fans protest over Super League involvement. Chelsea FC owner Roman Abramovich and board 'deeply regret' joining ESL. »
back to top