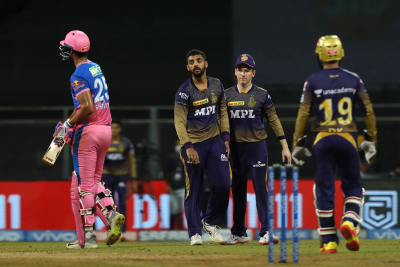 Rajasthan Royals captain Sanju Samson guided his side to their second Indian Premier League win of the season with a six-wicket win over Eoin Morgan's Kolkata Knight Riders.

Chasing 134 to win Samson made an unbeaten 42 as Rajasthan won with seven balls to spare.

Kolkata made 133-9 with Rahul Tripathi making 36 and Dinesh Karthik 25.

After falling to 31-5 in their last game against Chennai Super Kings Kolkata batted with more restraint during their innings, and only scored 25 runs in the six-over powerplay before slipping to 61-4 in the 11th over when Morgan was run out in comical fashion.

The England limited-overs captain was yet to face when a shot from Tripathi struck his bat at the non-striker's end and then confusion led to be him being comfortably run out by Morris - who equalled his best IPL figures from 2015, when he was in his first spell at Rajasthan.

Earlier Buttler - who was fielding in the covers rather than behind the stumps - ran out Shubman Gill with a direct hit.

Rajasthan, who are without the English trio of Ben Stokes, Jofra Archer - both through injury - and Liam Livingstone who has returned home due to bubble fatigue, were always in control of the chase.

Despite the loss of Buttler, who was trapped lbw by spinner Varun Chakravarthy, they reached 50-2 in the powerplay.

Although Morgan rotated his bowlers well and put pressure on Samson - who hit the winning run and is now fourth on the highest run-scorers in this season's tournament - he lamented the lack of runs his side made saying they were "at least 40 runs short".

His side are bottom of the table, with just one win from their opening five games, while Rajasthan move up to sixth.