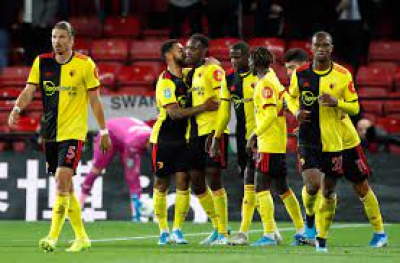 Watford sealed automatic promotion back to the Premier League at the first attempt after a narrow home win over Millwall.

Ismaila Sarr's composed 11th-minute penalty, after the Senegal winger was brought down in the box by Billy Mitchell, proved enough for the Hornets.

Mitchell drew a save from home keeper Daniel Bachmann before the break with a shot from outside the box before Mason Bennett saw his follow-up effort clip the top of the bar.

Bachmann clawed away a close-range effort from a corner as Millwall pressed for an equaliser in the second half, but Watford held on to secure an eighth successive league victory at Vicarage Road.

Watford have followed Norwich City in securing an instant return to the to flight after relegation last season, and their impressive home form has been the cornerstone of their promotion bid.

Xisco Munoz's side are on their best run at at Vicarage Road since 1977 - and registered a club-record 18th home triumph of the campaign.

Sarr made no mistake from the spot, stroking the ball down the middle as Lions keeper Bartosz Bialkowski dived to his left.

Dan Gosling could have made it 2-0 with a header from Tom Cleverley's free-kick before the Watford goal came under threat, but a 22nd clean sheet of the season secured all three points and prompted celebrations at full-time.

The Blades, whose own relegation was confirmed by defeat at Wolves seven days earlier, handed a glimmer of hope to the other sides in the bottom three as David McGoldrick's winner punished poor Brighton defending.

Brighton remain seven points clear of 18th-placed Fulham and 10 above West Bromwich Albion, in 19th, with five games remaining but missed the chance to virtually seal their safety at Bramall Lane.

Twitter
More in this category: « Rajasthan Royals claim comfortable win over Kolkata Knight Riders in battle of strugglers. Real Madrid title hopes dented after a draw with Real Betis. »
back to top