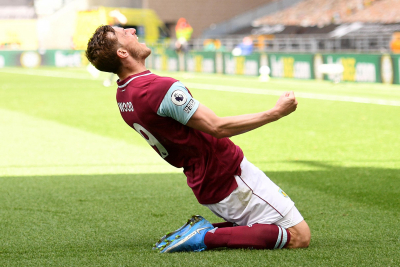 Striker Chris Wood scored a first-half hat-trick as Burnley cruised to a 4-0 victory over Wolverhampton Wanderers on Sunday and eased their Premier League relegation fears.

Sean Dyche's visiting side exposed a listless Wolves defence as they snapped a three-game losing run to climb to 14th in the league table and nine points clear of the relegation zone.

"We knew our position was in our hands and that was the main thing, we wanted to keep it that way and this (win) has made it a little bit easier now."

Burnley opened the scoring at Molineux in the 15th minute when Wolves defender Willy Boly misjudged a long ball, allowing Wood to control it before scoring with a powerful finish into the bottom left corner.

The duo combined again just before halftime as Wood completed his first Premier League hat-trick with a header from a floated McNeil corner.

"He knows what I would do and I know what he wants to do, and I know it's been a while since he's scored and I got an assist, we were speaking about it yesterday and today," McNeil said of his on-field chemistry with Wood.

"I thought all of his finishes were amazing and he deserved the hat-trick."

Burnley's Matej Vydra found the net four minutes into the second half but his effort was chalked off by VAR for offside.

The visitors kept pressing forward, however, and added a fourth through Ashley Westwood, who netted with a thumping shot from the edge of the box after being set up by Wood.

Wolves, who suffered their heaviest top-flight home defeat since 2012, remained 12th in the table.

Twitter
More in this category: « Pochettino hopes Mbappe's thigh injury is not serious ahead of Man City clash. Brandon Stone takes playoff victory in Limpopo Championship. »
back to top