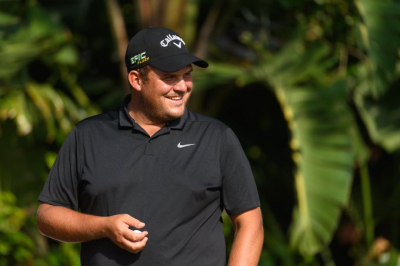 This is a lesson.

It's a lesson in chasing your dream. It's a lesson that the dream is the easy part. How badly you want it though, that's where it gets so much harder.

It's a lesson a teenage boy can teach you, as he lives in the garage of his golf coach, attending his sixth high school, and while trying to shut out all the voices telling him that his dream to become a professional golfer is a silly dream.

And yet a man who was named after the Formula 1 racing driver Giancarlo Fisichella (he doesn't know how his dad came up with the different version of his name), had no amateur golf career to speak of, and who midway through high school discovered his eyesight was bad enough that he couldn't see a cricket ball being bowled at him, has played in a US Open and a World Golf Championship event, has won seven times on the Sunshine Tour, and joined some of the greats of South African golf to have won the Sunshine Tour Order of Merit.

Ahead of his appearance in this week's Bain's Whisky Cape Town Open at the Royal Cape Golf Club, the blue eyes and warm smile of JC Ritchie give no indication whatsoever of the deep well of guts and character under the surface.

"Sometimes it's tough chasing your dream because there are lots of influences and important people in your life you need to go against. Sometimes you have to swim upstream, and you upset a lot of people. At the end of the day, when things work out, they all understand. But it's tricky. It's not easy getting to the top of any sport in the world. Some difficult decisions will need to be made at some point in your career.

"When I was younger I always felt like there were a lot of critics. People who said it was a silly dream and it wouldn't work out. I was a decent junior golfer, but I was nothing but an average amateur. I didn't get picked for any big amateur teams. I didn't really achieve anything in amateur golf. I didn't really have much going for me to tell myself that I'm good enough to play on Tour. At the start of my career there was a lot of grinding to prove people wrong. After my second win I felt I'd proved my point, and now it's about chasing my dream the way I want it and not worry about proving people wrong."

Somewhere in between the time before he could even walk, when he remembers watching his father hit golf balls on the driving range, to that critical point after high school when he had to make a life-changing choice, Ritchie has never doubted his ability to play professional golf at the highest level. And be good at it.

"Golf has been a part of me since I was young. I'd watch my dad hitting golf balls on the driving range, and at all the holiday spots we went to I'd always go with when my dad played golf and watch him. My dad was a pretty good golfer. Slowly but surely the game started biting me and I just found a love for the game.

"I played rugby in primary school, and then I realised I wanted to take golf a bit more seriously and I felt I needed to look after my body more. That didn't go down well in my family, with the Afrikaans rugby culture. I also loved playing cricket. I just couldn't bat because my eyesight was pretty bad. I only realised that halfway through high school. I couldn't understand why I couldn't see the cricket ball, and then I got contact lenses halfway through high school. I was a brilliant bowler though.

"But I think my dad always wanted me to become a golfer. He was pretty good and he wanted to become a professional, but had a bad motorbike accident and that stopped his dream. I then took over the dream and made it a reality."

That is a very brief highlights version of a dream that was years in the making and took a whole lot more sweat and tears than many people realise. And it required a teenager to make the kind of decisions most adults would shy away from.

"I went to a few high schools. I did two months in Standerton High School, then moved to Pretoria Boys High and finished Grade 8 and 9 there. Then in Grade 10 Retief Goosen opened up a sports academy and I did Grade 10 there. Then the school closed, and I ended up moving to Southdowns College and finished Grade 10 there. Halfway through Grade 11 I moved back to Standerton and lived with my dad. But then he had to move down to Richards Bay for work, and I didn't have place to stay. Then I came back to Pretoria and spent Matric and the year after Matric living with my golf coach, Graeme Francis. He converted his double garage for me and built me a room. My parents didn't have the money to send me to boarding school, so he made a plan for me. I lived with him for two years. He looked after me like his own child. There were so many small things that got me to where I am today."

After high school, Ritchie had to decide whether to go and study or continue pursuing his dream.

"There wasn't enough money to do both. I made the decision after school to not play amateur golf and put all my eggs in one basket and turn professional. I took all the finances I had – every cent – and played the IGT Tour for a year and managed to get my card. It took every cent I had, every ounce of energy and sleep to make it. Then one of my dad's good friends gave me a sponsorship and funded my career for 10 years. I don't have words to describe how grateful I am for that support from him."

And it's all convinced Ritchie of a few truths about dreams, and what it takes to achieve them.

"There's more than one way to do things around here. Even once I got my card, it took three years for me to win my first tournament. That's the learning process. I think a lot of young golfers want to push too hard and want it too quickly. Some of the special kids around will win quickly and they will go far, but for the rest of us it's a grind. The harder you work, the more you're able to accept it takes time.

"I see a lot of brilliant young amateurs turn pro and come out on the Sunshine Tour and struggle. I think there is a lot of pressure on them, and they try and force it and make everything happen too quickly. But this is a process. There is a lot of learning that needs to happen out here. The faster you realise that it's a process and give yourself five years instead of one year to do something, that's when you find progress. And failure will always be the best way to learn."

Even now, well established on the Sunshine Tour and now looking to take the next step on the European Challenge Tour this year, Ritchie keeps learning.

"I felt like my game was starting to move to a new level towards the end of the 2019 season, and then through lockdown something happened. I spent the entire 2020 just grinding and trying to find my game again, and to teach myself how to score and shoot under par again. Somehow, something happened in lockdown and I just lost my game. Last year was a big struggle and a big learning curve for me. I'm just happy I've worked through that and that my game now is close to where it needs to be again.

"I was going to play a full season on the Challenge Tour last year but Covid had other ideas. It gave me a year of grinding and learning and sweat and tears, and now it feels like a fresh start again and I've got the opportunity to run with some momentum into the new year. Of course my expectations are high, but I know I'm playing golf courses I've never seen before and traveling to countries I've never been to before. So there's a lot to learn. I'll accept whatever the game gives me."

Ritchie speaks of the game of golf with a kind of realism that is often missed in the romance and glory of what some perceive to be the life of a professional golfer.

His talk of dreams is never devoid of the hard work and sacrifice that accompanies them. Even when he speaks about his inherent love of the game, it's a love he knows comes paired with plenty of heartache.

"This game can make you tear your hair out the one day and make you feel on top of the world the next. But I suppose what keeps driving me is all those dreams as a youngster. It's those dreams that make me want to tee it up every day and keep working. It's a combination of a lot of years of dreaming and goals that I've set.

"It doesn't get easier. No matter how many times you win, no matter how well or badly you think you're playing, it never gets easier. It's always difficult. There's always a grind, and getting over that is the key to eventually having success. Fighting through the struggles. It's a never-ending rollercoaster. Every week is pretty much a restart. You never really know what you're going to get at the end of the week. But the harder you work when you are younger, the longer your peaks will be when you get older."

Perhaps this explains why Ritchie's favourite Major is the US Open, purely because it's just so hard.

"I remember watching Tiger Woods win the US Open by so many shots all the time, and often he was the only golfer in the field under par. I always felt like that was the toughest tournament in golf, and if you could win there you could win anywhere. I played in the US Open in 2020 and at Winged Foot, one of the most difficult courses in America. It was a bit of a shock to the system to see what I'm preparing myself for. That was my first Major, and being the US Open and at one of the toughest venues was quite special."

Again, Ritchie's choice of words about his US Open experience is key – "what I'm preparing myself for". In his mind, you haven't arrived when you play in your first Major. You're just starting to learn, at a new level of the game. It's his process, and much like when he was a teenager, it's one he prefers to work through on his own.

"I don't like to get too influenced by what's going on around me. I try and do my own thing in my own time. Sometimes you need someone to grab you by the neck and pull you in a direction. But most of the time I like doing things my own way, and doing so quietly."

And that boy who dreamed his biggest dream in the garage of his golf coach is quietly going about making it happen. Every single day.