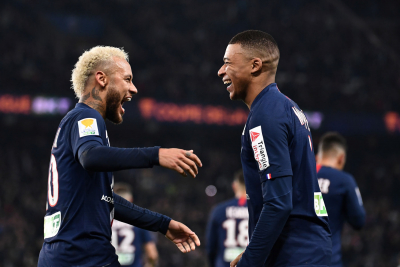 Neymar says the current season has been his happiest at Paris St-Germain amid speculation over his future.

The Brazil forward, 29, is yet to sign a new contract at PSG with his current deal running out next summer.

He has been linked with a move away, including a return to his former club Barcelona who he left for PSG in a world record deal in 2017.

"This year PSG has really improved and we have worked a lot to keep improving," Neymar said.

"I really feel great, really happy. I am most happy this season.

"This season we beat Bayern and will do everything we can to beat Manchester City.

"They are a great team to play against. It will be a tough game. Want to play as well as we can.

"We really want to win the Champions League."

Neymar has scored six goals in seven games in this year's competition and 14 goals in 24 games in all competitions.

The French giants, who appointed former Tottenham boss Mauricio Pochettino in January, are currently second in Ligue 1, a point behind leaders Lille as they chase a fourth consecutive title.

"We allowed him to do what he needs to do," Pochettino said of Neymar.

"It is not like a young kid. You need to take care about all the players.

"Nothing special. He and all the players are treated the same way."

Against City, Neymar will form a formidable front line with France striker Kylian Mbappe, who has scored 33 goals in 38 games this season, including two against defending champions Bayern Munich in the quarter-finals.

"I try to sleep well last night and I slept when I was not thinking about their players like that," City manager Pep Guardiola said. "They are incredible, top players.

"We are going to try to stop them. We will train together, play good football, defend well as a team and try to score goals."

Neymar won his only Champions League title at Barcelona in 2015 with his best result since coming last season when PSG lost to Bayern in the final.

Twitter
More in this category: « Euro 2020 squads will be expanded from 23 to 26 players. Wimbledon to become 14-day tournament from 2022 with play on Middle Sunday. »
back to top