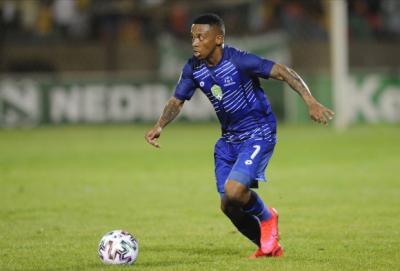 Maritzburg United needed a late strike from the penalty spot to see off Stellenbosch FC 1-0 in the DStv Premiership on Tuesday afternoon.

Bandile Shandu and Nazeer Allie were recalled to the Maritzburg side from the 1-1 draw against Baroka FC, as Stellies restored Leletu Skelem to the playing personnel.

Victory eases their relegation fears, moved the Team of Choice within a point of 12th-placed Stellies, but having still played two games less than their rivals.

The hosts were unable to convert any of a catalogue of chances and ultimately succumbed to yet another defeat on home soil, as their winless run in the league stretched to seven matches.

Stellenbosch conjured the first chance of the match in the 17th minute. A long throw-in from Rafiq de Goede caused all sorts of problems in the Maritzburg box, but Ashley du Preez headed wide from close range after the ball fell fortuitously for him.

Du Preez squandered another gilt-edged chance in the 36th minute when a long ball from Sage Stephens forced Clayton Daniels into a defensive error, but despite having pounced on the loose ball, the Stellies forward rushed his effort at goal.

The Team of Choice entered the second half keen to revitalise their stall following a slow first half, but a bewildered Stellies didn’t back down with Daniel Morgan and Fares Hachi introduced.

Stellies could’ve finished off matters late on from a move across the area, but Phathutshedzo Nange and Sinkala couldn’t pounce.

Maritzburg finally created a chance of their own three minutes later as a Daniels header found an unmarked Travis Graham, but the midfielder failed to get the desired touch with the goal at his mercy.

The visitors were awarded a contentious penalty kick in the second minute of second-half stoppage time when the referee adjudged Junior Mendieta to have handled the ball inside the area. Kutumela duly stepped up to the mark and powered the ball home for his ninth goal in his last 10 league matches for the KwaZulu-Natal club.