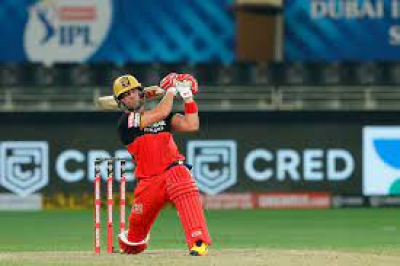 Australia’s David Warner joined a chorus of praise for AB de Villiers after the South African superstar reached a notable milestone in the IPL on Tuesday.

In yet another stunning batting display for the Royal Challengers Bangalore, De Villiers was not out on 75 off just 42, in an innings which included five sixes.

It was a knock that took him to 5000 runs in the IPL, becoming just the second overseas player to reach that milestone (after Warner).

AB de Villiers smashed an unbeaten 75 from just 42 balls to lead the Royal Challengers Bangalore to a highly competitive total of 171 for five in their IPL match against the Delhi Capitals at the Narendra Modi Stadium in Ahmedabad on Tuesday.

De Villiers hooked Marcus Stoinis for two sixes and carved another over backward point in the final over which cost 23 runs and transformed the innings on a slow pitch not conducive to attractive stroke play – at least, not for the majority of batsmen.

De Villiers, however, delivered three fours and fives sixes while everyone else struggled. Openers Virat Kohli (12) and Devdutt Padikkal (17) departed to consecutive deliveries with Avesh Khan bowling the Indian captain with the last ball of the fourth over and Ishant Sharma bowling Padikkal at the start of the fifth.

Glenn Maxwell was just looking dangerous with 25 from 20 balls (1x4, 2x6) when he heaved veteran leg spinner Amit Mishra to Steve Smith at long on and Rajat Patidar’s enterprising 31 from 22 balls ended with a similar shot against left spinner Axar Patel (4-0-33-1) to the same fielder.

Washington Sundar endured a miserable struggle just when acceleration was desperately required, limping to six from nine balls before splicing a desperate pull shot straight back to bowler Kagiso Rabada.

Daniel Sams (3* from two balls) fulfilled his role perfectly in the closing two overs by standing at the non-strikers end and running hard when required.

The teams are in second and third place on the log with four wins from their first five games, behind the Chennai Super Kings on net run-rate, who have the same win/loss record.