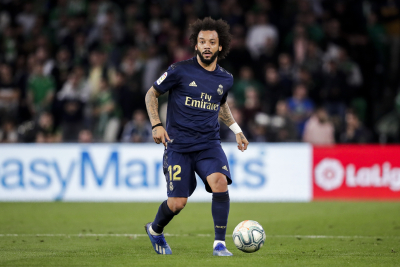 Real Madrid defender Marcelo could miss the second leg of their Champions League semi-final at Chelsea because he has been called up to monitor a polling station during local elections.

The elections for the Madrid assembly take place on Tuesday, 4 May.

Real, who were held 1-1 at home in the first leg, play the second leg at Stamford Bridge on the following day.

The Spanish club are "analysing the situation" to see if "any regulation will let him travel with the team".

The Brazil left-back started in Tuesday's game, which saw Chelsea come away with an away goal in a deserved draw against the 13-time European champions.

Unless Marcelo is excused from his election-day duties, he will not be permitted to travel with the team the day before the game.

Spanish newspaper El Mundo report the club had appealed to the Electoral Commission, but the request was denied.

All Spaniards on the electoral register can be called up to work at polling stations and are paid 65 euros (£56), needing mitigating circumstances to be excused.

His predicament, while certainly one of the more unusual reasons to potentially miss out on a Champions League semi-final, is not unprecedented in Spanish football.

Twitter
More in this category: « Stone predicts more South African success in Cape Town. Novak Djokovic withdraw from the Madrid Masters but to defend Rome title. »
back to top