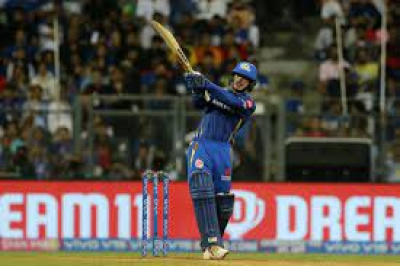 The South Africa batsman hit six boundaries and two sixes as the five-time winners chased down 172 with nine balls to spare.

Mumbai remain fourth in the table after the win with Royals second from bottom.

Having lost the toss and being put into bat, Royals got off to a solid start by reaching 47-0 after six overs.

Opener Buttler hit three boundaries and three sixes in his 32-ball knock but once again failed to convert his innings into a substantial score.

The England vice-captain now averages 21.6 from six matches in this year's IPL.

Having just launched Rahul Chahar for six, Buttler advanced down the wicket to the leg-spinner and was stumped by wicketkeeper De Kock.

Chahar, who finished with 2-33, then had Yashasvi Jaiswal caught and bowled for 32 from 20 balls.

Captain Samson's 42 from 27 balls came to an end after he was bowled by a superb Trent Boult yorker but Jasprit Bumrah was the pick of the Mumbai bowlers, conceding just 15 runs from his four overs and taking the wicket of Shivam Dube (35)

Meanwhile this year's Twenty20 World Cup could be moved to the United Arab Emirates if India continues to suffer with a second wave of the coronavirus pandemic.

Dhiraj Malhotra, from the Board of Control for Cricket in India (BCCI), said he is hopeful India could still host the T20 World Cup.

"I've just been named one of the tournament directors, so I'm doing everything we can to make sure it happens," said Malhotra, who is general manager for game development with the BCCI.

"We will be doing normal scenario, and worst case scenario, so with all that we're talking to the ICC at the moment."

Australia will host a T20 World Cup in 2022, postponed from last year due to the pandemic.