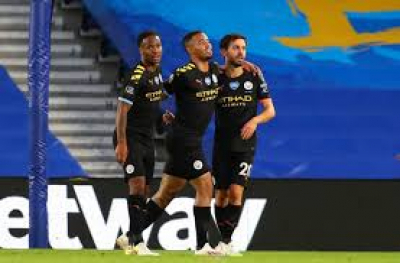 Manchester City are aiming to become English champions for the seventh time in their history and win the Premier League title for the fifth time in 10 seasons.

With five games of the Premier League season left Manchester City are 10 points ahead of rivals Manchester United. Leicester are third, 15 points behind City but with a far worse goal difference than both the top two.

City need six points to guarantee the title, although five will be enough if they maintain their goal difference advantage.

That means the earliest City can be celebrating is Sunday, 2 May. They will be champions if they win at Crystal Palace on Saturday and then United lose at home to last season's champions Liverpool the following day.

If both teams keep winning then City manager Pep Guardiola will win his third English league title on Saturday, 8 May at home against Chelsea.

Meanwhile Southampton held Leicester to a draw despite playing more than 80 minutes with 10 men to frustrate the Foxes in their push to clinch a top-four finish.

Jannick Vestergaard was controversially sent off after just 10 minutes when his tackle on Jamie Vardy was deemed to have denied the Leicester striker a goal-scoring opportunity.

Vestergaard, on the edge of his box and the last defender, got the ball with a lunging tackle but referee Robert Jones deemed his follow-through on to Vardy's ankle had prevented the striker running in on goal.

That decision set the game's pattern, Leicester probing while Southampton defended deep, but it was the Saints who took the lead in the 61st minute.

James Ward-Prowse scored from the penalty spot after Kelechi Iheanacho had blocked Stuart Armstrong's effort with his arm raised up by his head.

The point takes Leicester eight points clear of fifth-placed West Ham having played a game more but they have a difficult end of the season to come.

Twitter
More in this category: « Chiefs gunning for 3 points in their clash with Bloemfontein Celtic. Man City edge closer to Premier League title with win at Crystal Palace. »
back to top