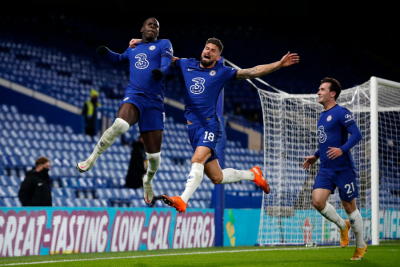 The German, one of five changes in between the Blues' Champions League semi-final legs against Real Madrid, latched on to Mason Mount's through ball to give them an early lead.

He doubled their advantage when he finished after a one-two with Timo Werner.

In between those efforts he also had a goal correctly ruled out for offside.

Fulham had plenty of chances in the first half with Antonee Robinson and Ola Aina forcing good saves from Edouard Mendy.

But they created nothing of note after the break and now sit nine points off safety with four games to go.

"I think it was very important. We have to come in the top four of the Premier League, that is our goal for the season and this win today is crucial for us. Then, on Wednesday we have another important game so we're happy with the win," Havertz said after the game.

Chelsea, who just need a goalless home draw against Real on Wednesday to reach the Champions League final, have a six-point cushion over West Ham in the top four.

Meanwhile Anwar El Ghazi's superb second-half strike secured victory for Aston Villa and dealt a significant blow to Everton's hopes of finishing in the top four of the Premier League.

El Ghazi curled home from the edge of the box with 10 minutes remaining to secure Villa only their third win in their last 11 league games.

Everton had started the day six points off the top four but this defeat, coupled with a win for Chelsea, means they are now nine points adrift of Thomas Tuchel's side.

El Ghazi's winner was the only highlight of a relatively flat second half that failed to build on a pulsating first.

Ollie Watkins opened the scoring when he pounced on a mistake by Mason Holgate before slotting past Jordan Pickford.

However, Everton hit back soon after when Dominic Calvert-Lewin powered home a header following a corner.

Home keeper Pickford then twice denied Watkins with excellent saves to keep Villa at bay, while ex-Everton midfielder Ross Barkley struck the post with a low effort from range.

Elsewhere Brighton moved within touching distance of Premier League safety for another season as Graham Potter's hosts opened a 10-point gap to the relegation places with victory over Leeds United.