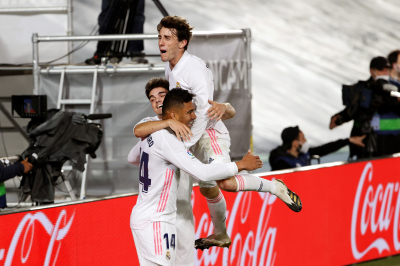 Real Madrid Brazilian duo Eder Militao and Casemiro struck in the second half to secure a 2-0 home win over stubborn Osasuna on Saturday and keep the heat on La Liga leaders Atletico Madrid.

Defender Militao finally prised open the visitors by heading home from a corner in the 76th minute for his first league goal of the season.

Midfielder Casemiro made sure of the points four minutes later with a fortuitous strike when he attempted to control a through ball from Karim Benzema and sent it trickling into the bottom corner of the net, flummoxing keeper Sergio Herrera.

The win took second-placed Real to 74 points from 34 games and fellow title rivals Barcelona and Sevilla are in action on Sunday and Monday respectively.

Llorente then gave away a spot-kick in the 90th minute after handling the ball.

But Atletico escaped late drama as Fidel Chaves' penalty beat goalkeeper Jan Oblak but came back off the post.

The win moved Atletico on to 76 points with four games remaining.

Twitter
More in this category: « Havertz double helps Chelsea overcome Fulham to close in on top four finish. Inter Milan on brink of Serie A title with win that relegates Crotone. »
back to top