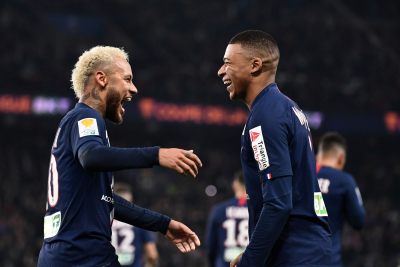 Neymar scored one and set up the other as champions Paris St-Germain beat Lens to move top of Ligue 1 and put the pressure back on title rivals Lille.

The Brazil forward slotted in the opener at Parc des Princes, then saw his corner headed in by Marquinhos.

Fifth-placed Lens halved the deficit almost immediately when Ignatius Ganago reacted quickly in the box to fire in.

But PSG saw out a vital victory to move two points clear of Lille, who host ninth-placed Nice later on Saturday.

Even if Lille regain top spot, PSG ensured they go into Tuesday's Champions League semi-final second leg at Manchester City on the back of a morale-boosting win.

"It was hard, especially in the second half. Before the game we needed four wins from four games so we'll take the three points, that's the most important," said PSG centre-back Presnel Kimpembe.

PSG were without France striker Kylian Mbappe, who was struggling with a calf injury and not risked by manager Mauricio Pochettino.

PSG, who are going for a fourth successive Ligue 1 title, travel to Manchester trailing 2-1 from the first leg in the French capital.

Dortmund became the first team to score five goals in the first half of a German Cup semi-final tie - but did not score again after the 41st minute.

Jadon Sancho set up Reyna's opener and England team-mate Bellingham for the fifth.

They were without Erling Braut Haaland through injury.

Dortmund's final against Leipzig - who beat Werder Bremen in a dramatic extra-time finish - is on Thursday, 13 May.

It will be a meeting of two managers who are leaving their jobs at the end of the season. Edin Terzic is only Dortmund interim boss and will be replaced by Marco Rose.