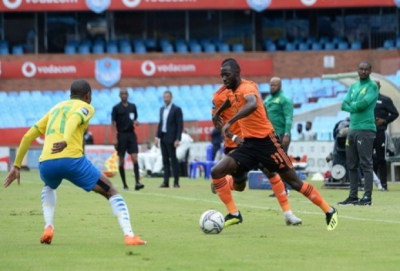 Mamelodi Sundowns will be fighting to reclaim the top spot while Orlando Pirates continue with their chase of a Caf Champions League berth when the heavyweights clash in a Premier Soccer League showdown at Orlando Stadium this afternoon.

Sundowns have gone three league matches without a win and saw their lead at the top of the log cut to one point when they were held 0-0 at home by Golden Arrows on 28 April.

The Brazilians have claimed 25 points from 11 away matches this season, with their last result on the road a 0-0 draw at AmaZulu in April.

"I think if I was at Pirates I'd say to myself that it would be nothing but a disaster not to consider ourselves to be in the title race. Mathematically it's still very possible that they can still win the title," said Sundowns co-coach Rulani Mokwena.

"History dictates that we've been chasing in the past. I can assure you that the pressure of chasing is far worse than the pressure of being on top. I'd always like to be No 1 because at this moment in time we have our own destiny within our control."

Pirates played to their ninth draw of the season when they were held 1-1 at Soweto rivals Swallows FC on 24 April, with Tshegofatso Mabasa netting their equaliser.

The Buccaneers have claimed 23 points from 11 home matches this season, with their last result as hosts a 2-0 win over Maritzburg United in April. Pirates sit nine points behind Sundowns with seven games to go.

"We look at it game to game, always. It was a good game for us [against Swallows]. I think we deserved the three points. But we won’t speak about it, the title or the Caf Champions League spot. It’s still a long way but we still need points for these targets," said Pirates head coach Josef Zinnbauer.

"That’s the reason why I can say that I am not happy. The performance was very good but the result was not enough for the performance we had. Normally you get three points."

In head-to-head stats, Sundowns and Pirates have met in 72 league matches since 1985. The Brazilians have claimed 31 wins compared to 21 for the Buccaneers, while 20 games have been drawn. The Soweto side have won 11 of 35 home matches in the rivalry, suffering 16 defeats in the process.