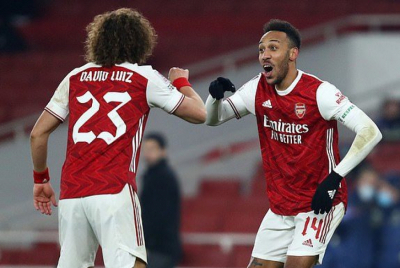 Arsenal prepared for their Europa League showdown against Villarreal with a confidence-boosting win away to Newcastle at St James' Park.

Mohamed Elneny scored his first Premier League goal for the Gunners, before Pierre-Emerick Aubameyang secured the points in the second half.

Arsenal trail 2-1 after the away leg of their semi-final tie with Villarreal and victory in the north east of England was their first in four games.

The Magpies had an excellent April to distance themselves from the bottom three but they struggled to impose themselves on Sunday.

Steve Bruce's side, who lost Fabian Schar to a straight red card after a late challenge on Gabriel Martinelli, remain nine points above the relegation zone with four games remaining.

Arsenal, who host Villarreal on Thursday, move back above Aston Villa into ninth place in the table.

Meanwhile Manchester United fans have broken into Old Trafford and are protesting on the pitch after resuming their fight against the Glazer family's ownership ahead of Sunday's clash with Liverpool.

Hundreds of fans got into the stadium ahead of the behind-closed-doors Premier League contest causing the match to be delayed.

The match between United and Liverpool was due to begin at 4.30pm, but no new kick-off time has been finalised.

Twitter
More in this category: « Jos Buttler scores maiden T20 hundred with 124 off 64 balls for Rajasthan Royals in IPL. Sundowns back to winning ways in the DStv Premiership with victory over Pirates. »
back to top