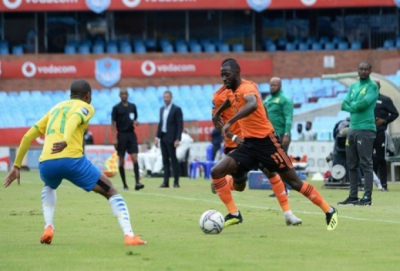 Mamelodi Sundowns have returned to the top of the DStv Premiership log after claiming a classy 3-0 away win over Orlando Pirates on Sunday afternoon.

Just 24 hours after being knocked down to second spot by in-form AmaZulu, the Brazilians responded with an impressive showing at Orlando Stadium which sees them re-establish a one-point lead at the head of the table (with two games in hand over their nearest chasers). The Buccaneers, meanwhile, are now 12 points off the pace of their vanquishers and remain in fifth place.

Sundowns were responsible for most of the attacking forays in the opening quarter of the match, with Lebohang Maboe striking a volley wide of the mark in the ninth minute, a short while before former Pirates forward Kermit Erasmus had an effort deflect off a defender for a corner kick.

The hosts had their first attack of note midway through the first half when Paseka Mako lined up a long-range effort – his shot was on target, but easily tamed by ‘Downs goalkeeper Denis Onyango.

Halftime saw the teams locked at 0-0, with neither Wayne Sandilands nor his counterpart Onyango called into significant action throughout the first 45 minutes. Sundowns made a change at the start of the second half, replacing Erasmus (who appeared to pick up a knock just before the interval) with Gift Motupa.

Just over 10 minutes after the restart Sundowns were awarded a penalty when the referee adjudged Innocent Maela to have handled from Peter Shalulile’s turn and shot. Defender Ricardo Nascimento coolly sent the spot kick into the top corner of the net to make it 1-0 in the 58th minute.

Pirates suffered a further setback midway through the second half when Pule was forced off with a hamstring injury, leading to the introduction of Tshegofatso Mabasa – a genuine centre forward to act as a focal point for their efforts at a comeback.

Shalulile soon profited from great pressing high up the field by Motupa, who blocked an attempted pass out from the back by Thulani Hlatshwayo – the subsequent loose ball rolled perfectly for Shalulile, who drove into the area and easily beat Sandilands for 2-0 in the 76th minute.

On 80 minutes Lyle Lakay made it 3-0 with a perfectly-executed free kick, striking a ball around the defensive wall and into the back of the net via the inside of Sandilands’ right-hand upright – with the goalkeeper having no chance whatsoever.

The teams will return to DStv Premiership action this coming Wednesday, 5 May, with Sundowns at home to Maritzburg United and Orlando Pirates hosting Black Leopards.

Twitter
More in this category: « A comfortable victory for Arsenal while Man United fans protest on the pitch. Ritchie finds his way back in Bain’s Whisky Cape Town Open. »
back to top