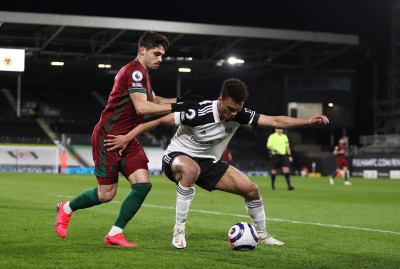 West Brom's Premier League future is all but over after Sam Allardyce's side could only secure a point from their Black Country derby with Wolves.

Allardyce's proud record of never being relegated now requires his side to win all four of their remaining games, beginning with a trip to Arsenal on Sunday, and hope the five teams outside the drop zone that they can still catch fail to win another match.

That combination seems highly unlikely, even with the battling qualities West Brom showed during a game played in torrential rain to earn a point through Mbaye Diagne's header after Fabio Silva's fortunate first-half opener had put Wolves in front.

Nuno Espirito Santo's depleted squad, who lost Wily Boly in the build-up to a positive coronavirus test, carried the greater threat for most of the contest, with Baggies keeper Sam Johnstone saving well from Nelson Semedo and Adama Traore either side of the interval.

However, while Silva ran away in jubilant celebration after sending the ball over Johnstone and into the net stoppage time, replays showed the young Portuguese knew nothing about it as Kyle Bartley's clearance cannoned off his standing foot.

Meanwhile Manchester United Supporters' Trust has urged co-chairman Joel Glazer to engage with fans to avoid a repeat of the protest at Old Trafford on Sunday.

The Football Association is investigating the incident and said it "understood" fan "frustrations".

Fans were protesting against owners the Glazers, who MUST says have "driven the club into debt and decline".

The Premier League is to bring in a new owners' charter to stop future attempts to join a breakaway Super League.

All owners will have to sign up to the new rule "committing them to the core principles" of the league with breaches punished by "significant" sanctions.

The Football Association said an inquiry into the six clubs has started.

"The actions of a few clubs cannot be allowed to create such division and disruption," the Premier League said.

"We are determined to establish the truth of what happened and hold those clubs accountable for their decisions and actions."

The Football Association added: "We wrote to all of the clubs to formally request all relevant information and evidence regarding their participation.

"Once we have the required information, we will consider what appropriate steps to take."

The Super League proposal, which also included some of Europe's biggest clubs, collapsed within 72 hours after widespread criticism from fans, players and governing bodies and politicians.

There have been various calls for sanctions against the clubs, including points deductions, relegation and bans from European competitions.

Twitter
More in this category: « PSG sweat on fitness of Mbappe for Man City Champions League clash. David Moyes backs West Ham to 'sneak' into Champions League. »
back to top