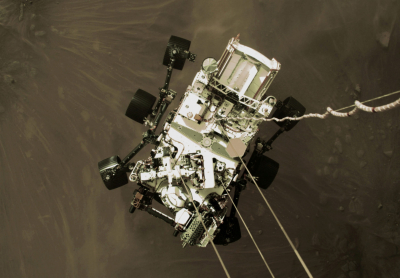 The footage was recorded on Thursday by a series of cameras mounted at different angles of the multi-stage spacecraft as it carried the rover, named Perseverance, through the thin Martian atmosphere to a gentle touchdown inside a vast basin called Jezero Crater.

Thomas Zurbuchen, Nasa associate administrator for science, called seeing the footage "the closest you can get to landing on Mars without putting on a pressure suit".

The video montage was played for reporters tuning in to a news briefing webcast from Nasa’s Jet Propulsion Laboratory (JPL) near Los Angeles four days after the historic landing of the most advanced astrobiology probe ever sent to another world.

Nasa also presented a brief audio clip captured by microphones on the rover after its arrival that included the murmur of a light wind gust — the first ever recorded on the fourth planet from the sun.