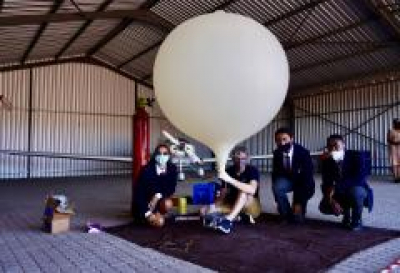 For over fifty years, people across the world have celebrated Earth Day on the 22nd of April, promoting the importance of environmental awareness and our role in protecting the planet.  Today we’re on the cusp of climate crisis, in the midst of mass extinction and still searching for solutions for the ever-increasing pollution of the planet due to human activity.  As we have seen from the rise of Gen Z climate activists, the sustainability of life on earth is close to the hearts of many young people.  They are concerned about the threats; hopeful about solutions and keen to get involved.

Through the innovative, global ExoLab programme which currently connects more than 300 South African learners from six schools to the international ExoLab community, I-Innovate and sponsor, IT service provider Tata Consulting Services South Africa (TCS) hosted a unique 2021 Earth Day event.  Students engaged in the ExoLab programme gathered online and in-person at Saldanha Airfield to launch two high pressure balloons for a scientific experiment that allowed them to utilise the latest technologies used in data analysis and collection, payload launching and weight management, as well as remote sensing and tracking.

The ExoLab programme connects students in classrooms around the world to scientists conducting innovative experiments on the International Space Station (ISS), investigating solutions to real-world problems.  The elements of Earth Day’s balloon launch go hand-in-hand with students’ global ExoLab experiment on the ISS to deepen their understanding of a range of maths, science and tech concepts as well as critical 21st century skills.

"This was an exciting opportunity for our students not just to commemorate Earth Day in a meaningful way but have real, hands-on experiences, navigating scientific enquiry and problem-solving with local experts and mentors" says I-Innovate CEO, Trisha Crookes.  "Two InterMet high pressure balloons were launched, each carrying a Styrofoam payload that houses the data collection and sensing devices. The average balloon flight takes approximately two hours and can ascend to an altitude of 30,000 metres above sea level. At its peak, the balloon bursts, and the payload box falls back to Earth where students have been tracking the flight in real-time. Students and mentors recover the payload upon its return to Earth and use the data analysis for real world problem-solving and innovation opportunities."

This collaborative Earth Day event was made possible through partnerships with aerospace education specialist, the Sakhikamva Foundation and satellite and technology solutions provider, Astrofica.  In 2018, I-Innovate and TCS launched ExoLab in South Africa, and South African learners have been involved in a variety of innovative experiments and real-time engagements with international scientists and astronauts that have linked their classrooms to the ISS. "The programme opens up the worlds of science, technology and space to South African learners who may never have had the chance to dream of careers such as an astronaut," says Nikhil Dabhole, HR Head of TCS South Africa.  "ExoLab is a growing global community, and there is a constant stream of new connections and new opportunities opening up to the learners involved in the programme.  They are collaborating not only with scientists and astronauts in space, but with likeminded young people all over the world.  This is the kind of inspiring, meaningful of 21st century learning that the country needs to enable young people from disadvantaged communities to change their stars."