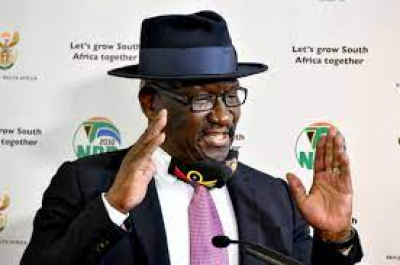 Government’s COVID-19 vaccination programme reached a milestone on Monday, with government rolling out the inoculation of the security sector.

Police Minister Bheki Cele and National Police General Khehla Sitole were the first to receive their jabs at the launch of the programme at the Orlando Stadium in Soweto, on Monday.

The sector is the latest to join government’s phased vaccination programme that started early this year.

Healthcare workers were the first in March in the Johnson & Johnson Sisonke programme. A month later, government began administering jabs on the over 60 population.

Two weeks ago, over 500 000 basic education workers began receiving their doses. Last week, the programme began focusing on those aged 50 and above.

The launch of the security sector vaccination programme was part of government’s tiered approach in an attempt to drive the country towards reaching herd immunity.

In the past four months, over 3.1 million vaccinations had been administered.

Speaking at the launch, at which 900 SAPS personnel were to receive doses, an elated Cele expressed delight.

"It has been a long walk [to reach this point] for us as the family of the SAPS. The sad part is that we reach this point when we have already lost about 672 of our members.

"We wish it could have been earlier so that we don’t lose those members and those 32 500 of them who have been infected - we thank God that 30 000 of them have recovered," he said.

The Minister said the jabs would assist the SAPS to work in a protected way.

"We have 180 000 plus members and we hope everyone will get the vaccine. It will start here with the rollout. The proper day of the rollout will be the 8th. We hope it will be finalised as soon as possible and we believe we will be much safer after that.

"I want to see things happen. It’s a beautiful Monday – it’s not every Monday that I am happy," he said.

She said dates for correctional services and metro police staff would be communicated in due course.

"This is a milestone as we move towards herd immunity."

The country, she said, had in recent days made inroads in its vaccination programme. The programme was expected to shift a gear higher with the South African Health Products Regulatory Authority (SAHPRA) at the weekend announcing it had granted conditional use approval of the Sinovac vaccine.

"[This] boosts our moral and boosts positively towards our vaccination programme. It now means we have multiple vaccines that are available to us," she said.

"Currently we are still cautioned against AstraZeneca though we are seeing the Delta variant dominating or growing; we still have the Beta variant, which makes it difficult for us to move.

Police are being vaccinated with the Johnson & Johnson vaccine, in an attempt to ensure that the vaccination programme gained momentum.

"This is very critical," she said.

Kubayi said the vaccination of the SAPS was important as police were critically assisting the Department of Health manage the pandemic.

"We are doing our best in terms of hospitalisation, in terms of recommending restrictions and all of that. It needs law enforcement in the forefront to ensure that what the NCCC has pronounced together with the President is implemented. So it is important for them to get this vaccine," she said.

Police urged to get jabs

Sitole urged police officers to get their jabs, saying it was important for the SAPS to fight crime with a healthy workforce.

"Today is a demonstration of this deliverable. It is important for us to show members of the SAPS force that we invest in their health and we want to make sure that, as they go out, they are safe.

"This is part of the safety strategy. As you see them here today, they are the ones in the frontline. They’ve been deployed to support the department of health in their endeavour to, firstly, ensure that we control the virus but also further make that we secure the vaccine.

He said police had noted a new modus operandi pertaining to the virus.

"We have done take downs where vaccines were [illicitly] being brought into the country in other ways. There has been other ways to try and disrupt the vaccine programme," he said.

He urged members to continue to rendering a "patriotic" and "selfless" service.