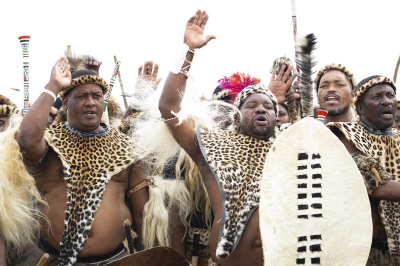 Inkosi Mangosuthu Buthelezi has lashed out at the supporters of former president Jacob Zuma, saying their week-long behaviour in Nkandla was treasonous and made a mockery of the Zulu nation.

Buthelezi, while addressing an impromptu press conference in Ulundi, northern KwaZulu-Natal, and speaking as an "elder", said that although he sympathised with Zuma and his family as he faced difficult times emanating from his Constitutional Court sentence, which earned him 15 months in prison.

Giving some historical background, Buthelezi said Zuma was not the only senior leader to be sent to jail yet; when others in history were jailed, there were no rebellions. Among the many incidents of jailing was that of King Cetshwayo in 1879.

"Yet when King Cetshwayo was arrested and sent into exile, neither the king’s regiments nor his people threatened a physical uprising, for it would have been hopeless and end in utter destruction."

He said he sympathised with Zuma, who was now facing the consequences for his actions.

"I sympathise with Zuma’s family in this difficult time. Any lawyer would have known the consequences awaiting the former president if he refused to comply with the Constitutional Court’s order to appear at the state capture commission.

"Zuma’s lawyers let him down and he is now facing the consequences. I am not judging his case, but I sympathise with his plight, for he is still an elder facing a very difficult prospect."

"What is happening in Nkandla right now runs contrary to our dignity as a people. We are making ourselves a spectacle in the eyes of the world."

Lashing out at Zuma supporters, he said they were committing a sin.

Correcting history, Buthelezi did not spare Mgilija Nhleko, the famed "commander of Zulu regiments", saying he was never installed in that position but was a mere headman (Induna) of the regiments.

Nhleko set tongues wagging when, over the weekend, he led a group to Zuma’s home, thus legitimising the presence of people who called themselves "Zulu regiments". Buthelezi said they had no idea who installed him and the Zulu king has summoned him to explain himself.