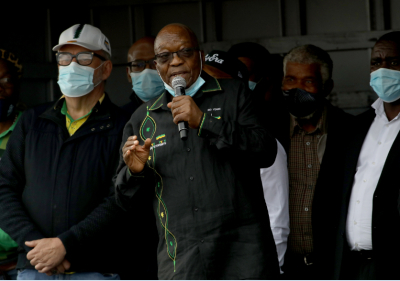 Today's meeting comes after the initial gathering, scheduled for last week Friday was subsequently postponed amid the rising tensions over Zuma’s prosecution.

Zuma was thrust into a corner last week after the Constitutional Court found he was guilty of contempt of court for disobeying an order to appear before the State Capture Inquiry and answer questions about his time in the Union Buildings. The court also sentenced him to 15 months in prison.

Following the judgment, Zuma has remained defiant, and has applied to the apex court to have his sentence rescinded. His supporters have been vocal about their criticism of the legitimate outcome, and have shown they are willing to use violence to defend him.

The ANC is said to be extremely concerned about the former President's conduct and the threats of violence, regarding it as a matter of "national importance".

It's expected the meeting will receive a report from the NEC members deployed to Nkandla. Ten NEC officials were tasked with looking into the matter.

NEC officials included Police Minister Bheki Cele, Transport Minister Fikile Mbalula, Health Minister Zweli Mkhize, who is on special leave, and Minister of Cooperative Governance and Traditional Affairs Nkosazana Dlamini Zuma were in KwaZulu-Natal over the weekend in an attempt to ensure that Zuma’s supporters didn’t get out of hand.

Human Settlements, Sanitation and Water Minister Lindiwe Sisulu and NEC member and head of the party’s subcommittee on peace and safety, Tony Yengeni, met Zuma on Sunday and it was reported that the provincial leadership also saw him, but it’s unclear if ANC leaders met him in substantial numbers.

Zuma told journalists he would not reach out to the NEC. "Why should I meet them? Why should they not meet me? I’m not the cause of this problem. You are now asking me to respond as if I’m now responsible to sentence Jacob Zuma to 15 months in jail without even appealing," he said.

Magashule - making reference to Zuma - told the crowd one day their commander in chief would give them marching orders.

He said those trying to destroy the ANC could not tell members to leave: "Please remain resolute. When they take you out of Parliament you must remain and say 'I am not going anywhere'."

It's believed the ANC is also expected to discuss issues around upholding the rule of law. The member said the NEC had to act against those who were defying the country's Constitution.