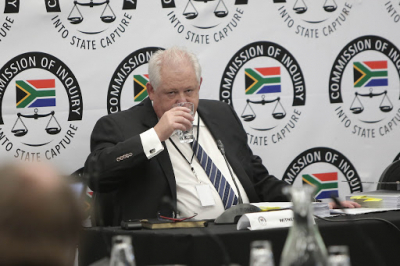 On Thursday, the Specialised Commercial Crimes Court sitting in the Palm Ridge Magistrate's Court granted the State's application for a separation of the trial due to Agrizzi's ill health.

Agrizzi appeared alongside Smith in October last year, with a small oxygen device. He has since failed to appear due to ill health.

His lawyer Mannie Witz said they didn't object to the separation of trial application.

"We don't want to delay and deny Mr Smith and the company that he represents the rights to a speedy trial and a fair trial in terms of Section 35 of the Constitution," Witz said.

"...it is just a separation of trials and if and when and once his medical condition... can improve then the State can then decide to proceed against him but they don't want to delay in all fairness."

The matter was postponed to 28 September.

The State is also expected to prosecute Smith on charges of tax fraud and tax evasion.

Agrizzi and Smith are charged with corruption, while Smith faces additional charges of fraud for alleged payments made to his company Euroblitz in 2015 and 2016.

The State alleges the payments were made to Smith to silence his opposition to Bosasa during parliamentary committee meetings.

Smith has pleaded not guilty and maintains the money was a loan from Agrizzi, which Agrizzi denies.

Twitter
More in this category: « Zuma will be 'afforded dignity throughout his incarceration' - Lamola. MKMVA spokersperson Carl Niehaus arrested outside Estcourt prison. »
back to top