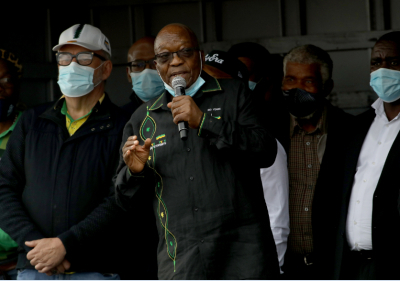 The Department of Correctional Services (DCS) has launched an investigation after photos went public on WhatsApp on Thursday afternoon showing former president Jacob Zuma being attended by a correctional services officer in what looks like the medical wing of the Estcourt Correctional Centre in the KwaZulu-Natal Midlands.

The former president handed himself to the Estcourt Correctional Centre on Wednesday night to start his 15-month prison sentence for contempt of court.

The Commission of Inquiry into Allegations of State Capture had approached the ConCourt on an urgent basis for an order that would compel Zuma to cooperate with the commission.

According to correctional services, a criminal case has been opened after a camera SD card containing images of Zuma being admitted to the correctional centre was stolen.

"The SD card was removed from the camera. The matter is highly sensitive and is being investigated by both the police and Correctional Services. The official involved has also been contemplated with a suspension notice."

An internal investigation revealed that the SD card may have been secretly shared with a known broadcaster.

The department said it would be approaching the relevant institutions for further action.

We are appalled by the distribution of these images on social media and we urge people to refrain from sharing them. DCS condemns in strongest possible terms such action and will leave no stone unturned in bringing those behind it to book.”

According to the department, Zuma will be taken through all the admission processes as per Correctional Services regulations, with other relevant prescripts pertaining to admitting and orientating newly incarcerated persons also to be followed and executed.

"Keeping inmates in a safe and secure custody remains cardinal to Correctional Services and we remain committed to this cause," it said.

The Estcourt facility was opened in 2019 after nearly two decades of refurbishment. It is now described as a "modern rehabilitation facility for offenders who are serving sentences longer than 24 months", a bill that Zuma does not fit with his sentence of 15 months for contempt of court.