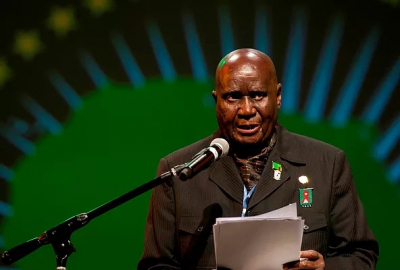 Sport, Arts and Culture Minister, Nathi Mthethwa, has described the former late Zambian President, Kenneth Kaunda, as a man of great discipline and dedication, conviction and conscience, as well as humour and humanity.

Speaking at the National Memorial Service for Dr Kenneth Kaunda, Mthethwa said Kaunda’s background was shaped by lessons from his parents - his mother who was a teacher and father, who was a reverend.

"Dr Kenneth Kaunda made it abundantly clear that Zambia’s support and participation in the liberation struggle was not based on a desire to make social, economic and political investments.

"Rather, it was simply doing what was morally correct and therefore, should not concern themselves with the question of whether or not there would be eventual rewards for the Zambian sacrifices, "Mthethwa said.

Mthethwa said Zambia, under Kaunda’s leadership, opened its borders up to those who were fleeing oppression and hosted leaders of liberation movements.

"This came at enormous cost because of their difficult geographical situation. South Africa, like many of the then frontline States, owes her freedom and independence to this gallant statesman, a jovial man, a creative worker, a sportsman and above all, a true and sincere African liberator," Mthethwa said.

Mthethwa said Kaunda commanded respect and admiration among his peers all-round, as shown by the frontline States.

"In international platforms, Dr Kaunda always expressed his determination to fight for the freedom of all oppressed African nations and all other nations of the world."

The national memorial was hosted under the theme, ‘Celebrating the Life & Legacy of Dr Kenneth Kaunda’ and was streamed on virtual platforms. Kaunda passed away at the age of 97 on 17 June 2021.

International Relations Minister, Dr Naledi Pandor, said Kaunda’s internationalism and Pan-African activism was evident even before he became the first President of an independent and democratic Zambia.

"This commitment to ending colonial subjugation of Africans became central to his role as the President of Zambia.”

Pandor said President Kaunda placed the people of Zambia and Zambia in the firing line of the government of apartheid South Africa and other countries seeking to hold on to the privileges of empire on the African continent.

He did this through his unwavering support for African liberation movements, included through providing them sanctuary in Zambia.

"As we celebrate his life and his achievements, let us ensure that we complete what he and his great friend President Nelson Mandela aimed for.

"Let us honour President Kaunda by ensuring that we all support the role of President Ramaphosa as the vaccines champion for the African Union."

Pandor said South Africans will forever be grateful for having an opportunity to associate with the late Dr Kaunda. “We will remain grateful to Dr Kaunda."

Zambia's High Commissioner to South Africa, Major General Jackson Miti, said the first President of Zambia, fondly known as "KK," was not only a leader and an inspiration to both the people of Zambia and continent, but was also a true gallant Statesman.

"Due to Dr Kaunda’s strong belief in continental cooperation, he advocated the need for unity of the liberation movements in individual countries, "Miti said.

Despite Zambia being exposed to numerous attacks and reprisals by white-ruled Southern Rhodesia and South Africa, Dr Kaunda did not relent in his quest for an independent continent.

"Dr Kaunda will be remembered for his outstanding leadership in the formation of the Non-Aligned Movement (NAM) amid aggressive controversy between the Western and Eastern blocs during the Cold War of the mid-1940s to the early 1990s.

"Dr Kaunda, a being a good-natured comrade of the South Africa liberation struggle, was close to veterans of the liberation movement such as the late Oliver Tambo, Nelson Mandela, Walter Sisulu, Chris Hani, and former President Thabo Mbeki, among others," Miti said.

At the funeral service of Dr Kaunda last week, President Cyril Ramaphosa described him as a loyal friend of the South African people.

"He stood by us during our long struggle for liberation. Even as the brutal apartheid regime sought to wreak havoc in the frontline States in its efforts to destroy the liberation movement, Dr Kaunda stood firm, and never wavered in his support for the people of South Africa and the region."