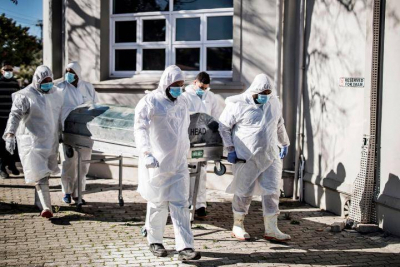 While a third wave of coronavirus cases in South Africa’s worst-affected province may have peaked, fatalities have risen 57% in the past week, data from National Institute of Communicable Diseases show.

Funeral parlors are starting to buckle under the strain, according to Nkosi Nare, chairman of the Inner-City Funeral Directors Association – South Africa, which represents 19 funeral parlors in Gauteng.

There’s a risk the province will run out of coffins, and that funeral parlors may have to try and speed up the burial processes to create space for incoming bodies, he said.

Excess deaths, seen as a more precise way of measuring total fatalities from the coronavirus, rose 44% to 3,224 in the week through July 3 in Gauteng. The number is higher than the peaks recorded in the province in the first and second waves, according to data from the South African Medical Research Council.

Deaths are expected to continue to rise as they tend to lag infections by several weeks. The province has confirmed 741,164 coronavirus cases and 14,133 deaths since the pandemic began.

Last month 40% of funerals the burial homes handled were coronavirus-related, but the proportion rose to about 60% in early July, she said by phone on Monday.

AVBOB Mutual Society, the country’s largest funeral service, is among those bracing for a sharp increase in business in Gauteng by mid-month.

"Funerals compared to June last year are up by approximately 25%, but not close to the levels of July and January 2020," when the country experienced its previous waves, said Pieter van der Westhuizen, AVBOB’s general manager for funeral services.

Neil Keight, managing director of Thom Kight and Co, sees fatalities peaking by month-end, given that infections have only just started to fall from record levels, and foresees the number of funerals exceeding those during the height of the first wave a year ago.

His burial home conducted 255 funerals last July, and had already handled 120 by July 5 this year.

The Department of Home Affairs didn’t immediately respond to questions as to whether it was issuing more death certificates than in previous waves.

Twitter
More in this category: « Covid-19 vaccine rollout to open for those aged between 35-49. Department of Health to make submissions on possible extension of lockdown. »
back to top