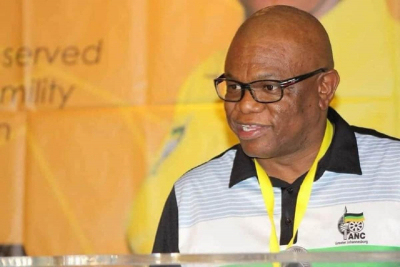 Condolences continue to pour in for Johannesburg mayor Geoff Makhubo, who died on Friday from complications related to Covid-19.

President Cyril Ramaphosa has described Makhubo's death as a loss to the City of Johannesburg and the province at large.

He said that his passing was a stark reminder of the threat posed by COVID-19, which had left everyone extremely vulnerable.

The president has lauded Makhubo for his contribution to the national effort to fight the pandemic.

Ramaphosa said that since Makhubo tested positive last month, he regularly posted public health messages urging people to take responsibility for their own safety and that of others.

Makhubo passed away on Friday morning, almost a week after being admitted to hospital with COVID-19 complications.

Gauteng premier David Makhura conveyed his condolences to the Makhubo family and the city of Johannesburg.

"We are shaken by deep sadness and feel the excruciating pain of losing mayor Makhubo. I send my heartfelt condolences to his wife, Dikeledi Makhubo, children, close relatives, friends and comrades of mayor Makhubo," Makhura said.

The provincial government said Makhubo was a loyal and committed servant of the people who dedicated his time to the development of the city and overall improvement in the quality of life for all the people of Johannesburg.

"In all the roles he served in, he placed the wellbeing of the people above everything else. A true servant of the people. During his short term as mayor of Johannesburg he elevated the agenda of fighting the devastating scourge of Covid-19," said provincial government spokesperson Vuyo Mhaga.

"As our country battles against the third wave of this pandemic, we have also endured many losses over the past 16 months.

"We hope the ramping up of the mass vaccination of our residents across the country will help prevent further loss of life due to this pandemic. We must continue to be vigilant and take the necessary precautions against Covid-19 so we can move out of alert level 4 as soon as possible," he said.

IFP Gauteng chairperson Bonginkosi Dhlamini said, "His loss is felt not only by members of his family and his political organisation but by all citizens of the city of Johannesburg."

Dhlamini said the IFP in Gauteng was deeply saddened by Makhubo’s untimely passing.

"Mayor Makhubo led the government of local unity alongside the IFP and other parties in the Johannesburg metro since December 2019. During his tenure, he served the citizens of the city with the utmost dedication and passion."

The DA in Johannesburg also extended condolences to Makhubo’s family and friends.

"We hope for peace and comfort for them in this difficult time," said Leah Knott, DA Johannesburg caucus leader.

ActionSA president Herman Mashaba said: "I would like to extend my sincere condolences to the colleagues, friends, and family of Johannesburg executive mayor Geoff Makhubo  following reports of his passing today. Makhubo was admitted to hospital with complications related to Covid-19 this past Saturday.

"In these difficult times, we are reminded of how fragile life can be and of our shared humanity. May Makhubo rest in peace in the comfort of his creator."

Twitter
More in this category: « Police destroy 24 901 firearms,half of which were voluntarily handed in. Covid-19 Daily Update: SA records 22, 443 new COVID-19 cases with 374 related deaths. »
back to top