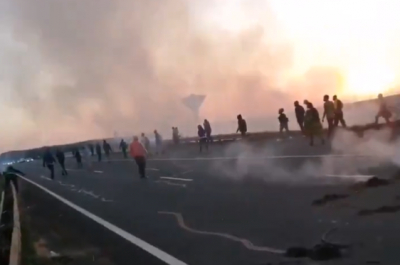 The KwaZulu-Natal Road Traffic Inspectorate (RTI) has warned motorists to avoid the N3 and officers are diverting motorists at the Midmar Dam offramp to alternative routes.

On Saturday, people in Mooi-River said the authorities were in the process of assessing the extend of the damage and the financial impact. One of the local business owners, who asked not to be named, said they watched on as groups of people looted the shops in the town on Friday evening.

Protesters began gathering in the area shortly after 12pm on Friday. Officials confirmed on Saturday morning 25 trucks in total have been set alight since.

Trucks set alight during the early morning hours are still burning. Law enforcement and emergency services are on scene and have advised motorists to avoid the area.

According to Truck and Freight, five trucks have been set alight on the N3 toll route this morning – three trucks were targetted on the northbound section while two southbound trucks are on fire as well.

While authorities said it couldn’t be confirmed if the protest action is linked to Jacob Zuma’s case, some protesters at the scene told reporters they are angry over Zuma’s arrest.

Protesters were reportedly throwing stones at passing vehicles and gunshots were heard. T&F said motorists in need of assistance can contact the 24/7 N3 helpline on 0800 63 43 57.

A view from the top as several trucks are removed from the Mooi River plaza N3 in KwaZulu-Natal by tow trucks. Amongst the vehicles torched was a petrol tanker(Sky Logistics) Fortunately it was empty. #sabcnews pic.twitter.com/w0JtIoDk3U— Jayed-Leigh Paulse (@JayedLeigh) July 10, 2021

A first responder told the outlet "protesters have been playing cat and mice with police".

They allegedly cause chaos in one area and as soon as law enforcement responds, the protesters move to another area. Once police leave to respond to unrest elsewhere, the protesters return.

Meanwhile KwaZulu-Natal Premier Sihle Zikalala said it will be "correct" for president Cyril Ramaphosa to pardon former president Zuma in an effort to "cool the situation "amid violent protests in support of the former president.

Zikalala said that he believed that considering Zuma’s age and well being they believed he should be pardoned.

"To pardon him will be correct," he said.

Zikalala had one-on-one interactions with Ramaphosa on Friday updating him about violent protest across the province.

Twitter
More in this category: « City of Johannesburg failed to provide services to Alexandra residents - Mkhwebane. Ramaphosa breaks silence on Zuma’s arrest and describes it as a sad moment. »
back to top