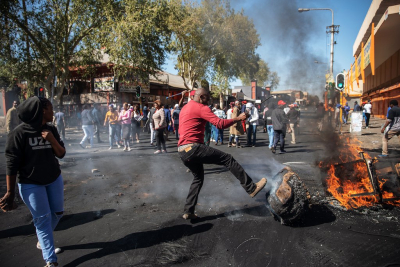 He said the M2 was completely blocked off at Denver between the Maritzburg offramp and Cleveland while officials are diverting traffic to the old Cleveland road for motorists lanes barricaded by rocks and burning tyres:

"We don’t want to risk anyone’s life by allowing them to drive on the freeway where they can or will be shot at."

Alternatively, Minaar said those going to the northern side of Johannesburg should use the N1 via the Western Bypass. There have been reports of protests along the N3. While it cannot be confirmed at the time of publishing, officers have been dispatched to investigate.

Meanwhile a  police officer was taken to hospital in the early hours of Sunday with gunshot wounds after a violent mob turned on police officers who responded to looting in Alexandra, Johannesburg.

Two other police officers were injured when they responded to reports that a group of people from Alexandra were targeting businesses and had broken into shops.

Spokesperson for the National Joint Operational and Intelligence Structure (NatJOINTS) Col Brenda Muridili, said it was reported that an 800-strong group of rioters attacked the police.

One officer is in hospital in a stable condition while two others were treated for minor injuries.

According to Muridili, police have since arrested 18 suspects in Alexandra, 16 of them for public violence also linked to the shooting of the police officer.

SAPS said 62 suspects arrested as pro-Zuma protests spread to Gauteng,while a statement on the latest developments was being prepared and would be released soon.

This story will be updated when that statement is released.

Twitter
More in this category: « Liquor industry appeals for a partial lifting of the ban on alcohol sales. Abiy Ahmed wins landslide victory in Ethiopian election. »
back to top