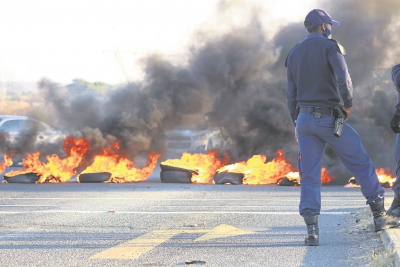 President Cyril Ramaphosa has warned those taking part in violent protests in some parts of the country, that the government will not tolerate acts of criminality.

Addressing the nation on Sunday evening, the president noted, "sporadic but increasingly violent protests in some parts of the country".

"Key infrastructure like national roads have been affected, slowing down the transportation of goods and services that keep our economy running.

"Property has been destroyed. Cars have been stoned. People have been intimidated and threatened, and some have even been hurt," he said.

These acts are endangering lives and damaging our efforts to rebuild the economy.”

The protests are linked to the recent arrest of former president Jacob Zuma, and led to the closure of a key trade route in KwaZulu-Natal after trucks were torched on Friday night, Bloomberg reported.

Parts of the N3 Toll Route, which links the port city of Durban with important business districts in Gauteng, have reopened, however, the protests spread to Johannesburg, as violence erupted in the city overnight.

More than 60 people have been arrested and authorities worked to disperse hundreds of protesters as businesses across the two affected regions were hit by looting, police said in a statement on Sunday.

At least one death has been reported. "An investigation is under way to determine the circumstances surrounding the fatal shooting of a 40-year-old man who was certified dead at a local clinic," police said.

Ramaphosa called for calm on Saturday. "The impact of public violence against the road freight industry and damage to freeways that serve as economic arteries will be felt also by the people organising and committing these crimes," he said in a statement.

And on Sunday, he issued the following warning: Let us be clear, as a nation, that we will not tolerate acts of criminality. "Those who are involved in acts of violence will be arrested and prosecuted. Those found guilty of breaking the lockdown regulations will receive the stipulated penalty."

Our Constitution guarantees everyone’s right to express themselves and to engage in peaceful protest. While there are those who may be hurt and angry at this moment, there can never be any justification for such violent, destructive and disruptive actions," he said.

Ramaphosa called it a matter of concern to all South Africans that some of the acts of violence are based on ethnic mobilisation.