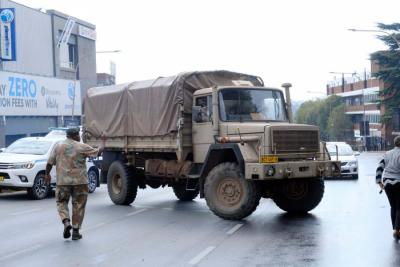 The South African National Defence Force (SANDF) will be deployed to Gauteng and KwaZulu-Natal to assist the South African Police Service (SAPS) in bringing widespread looting, rioting and destruction of property under control.

The government said that the SANDF has started pre-deployment processes and procedures in line with a request for assistance received from the National Joint Operational and Intelligence Structure (NatJOINTS) to assist law enforcement agencies deployed in Gauteng and KwaZulu Natal. The deployment will commence as soon as all deployment processes are in place.

"The duration and number of deployed soldiers will be determined based on the assessment of the situation on the ground by the relevant law enforcement agencies,” it said.

"Furthermore, it must be emphasised that the SANDF`s deployment objective is to provide safety and a safe working environment for members of the SAPS and other law enforcement agencies whilst they carry out their Constitutionally mandated law and order duties."

The riots erupted over the weekend, reportedly sparked by the arrest of former president Jacob Zuma last week, but quickly co-opted by opportunists and criminal elements. Civil action group Outa said that the violence has been fuelled by anger over poor service delivery and the ongoing failure of government at all levels.

The violence and destruction have so far been confined to KwaZulu-Natal and parts of Gauteng but this has wide-reaching implications for businesses across the country, as well as the wider economy.

Groups like Makro and Pick n Pay have suffered greatly from the unrest, with looters and criminals stealing products and destroying property, while malls and other outlets have been set on fire.

Businesses in the affected areas have shut down, with essential services like banking operations, healthcare and power maintenance also impacted. The criminals are targeting retail shops – big and small, including liquor stores – and have stolen merchandise which includes foodstuffs, electrical products and clothing.

The Institute of Risk Management South Africa (IRMSA), The Consumer Goods Council of South Africa (CGCSA) and the South African Chamber of Commerce and Industry (SACCI) have all condemned the attacks.

SACCI said that businesses have been the main target of the violence, which is happening as the country’s economy is already struggling to recover.

"This will further add to unemployment and delay South Africa’s reconstruction and recovery plan," the chamber said. However, it noted that this type of violent behaviour has been going on for months – long before the arrest of Zuma, which his supporters claim is the reason for the student flare-up.

"Whatever the grievance may be, this violent destruction of business, property and the intimidation of truck drivers, closure of major arterial roads, burning of trucks and damage to business equipment has been happening intermittently now for many months and precedes any recent constitutional court ruling against the former president," said SACCI chief executive, Alan Mukoki.

"Law enforcement should get to the bottom of this instigation as a matter of urgency, arrest and prosecute the perpetrators of these violent criminal acts."

IRMSA warned that the economic impact of the violence will be felt immediately as supply chains are disrupted, and said the risk for loss of life and reputational damage to South Africa as a whole is also high.

Meanwhile Gauteng police are currently investigating the circumstances into the deaths of four people since the break out of violent protests in the province. In KwaZulu-Natal, there is a report of two people who have been killed. The circumstances leading up to their deaths is under investigation.

"The extent of damage to property and the looting of businesses will be determined at a later stage," NatJOINTS said.

So far more than 200 rioters and looters have been arrested in both provinces.

More in this category: « Zikalala calls for calm while mob sets mall in Vosloorus on fire — several shops looted. Government extends the state of disaster by another month. »
back to top