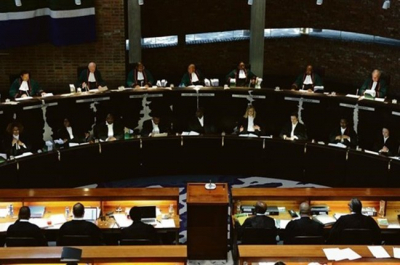 The application came before the apex court on Monday morning and saw Mpofu – who is representing Zuma in the proceedings – argue for almost five hours, right at the end of which he urged the court to order Zuma’s release for now.

Mpofu, SC, has told the Constitutional Court that it made "fundamental rescindable errors" in its contempt of court ruling against him.

Mpofu began his argument by telling the court it may have "exceeded the bounds of the Constitution".

Assuming the judgment of this court will be reserved, then what should happen in the interim?" he said.

He argued the court was empowered to "fashion" the remedy they were after.

"Namely that in that eventuality, in the interim the former president be released from custody," Mpofu said.

This, he said, on the basis of "the usual irreparable harm kind of test".

He pointed out that the same court had taken three months to hand down the ruling at the heart of the case, in which it found Zuma in contempt for refusing to appear before the Commission of Inquiry into Allegations of State Capture and sentenced him to 15 months in prison.

"But even if it’s a day or two, it doesn’t really matter because a person’s liberty is important," he said.

The move comes after the Pietermaritzburg High Court last week dismissed an urgent application to stay his detention, which Zuma had lodged there. Judge Jerome Mnguni ultimately found that the high court did not have the jurisdiction to interfere with an order handed down by the ConCourt.

Zuma is currently being detained at the Estcourt Correctional Centre.

Ngcukaitobi told the nine justices of the Constitutional Court on Monday that it did not disregard Zuma's rights in its contempt judgment.

"Mr Zuma had a trial, and it was a trial in accordance with the approved procedure for contempt of court proceedings," Ngcukaitobi argued.

He disagreed with Zuma's legal representative that the Constitutional Court made an error in its judgment.

When asked by Justice Chris Jafta whether Zuma couldn't be requisitioned and brought before the commission, given that he is in jail.

Nguckaitobi disagreed, saying the former president had shown that he was continuing with his contempt. He said.

Meanwhile, the Helen Suzman Foundation argued that it was not in the interests of justice for the Constitutional Court to rescind its contempt ruling.

Advocate Max du Plessis, for the foundation, said the case fails the legal test for rescission.

Du Plessis argued that the former president was given an opportunity to provide the apex court with his views on sentence. Instead, he "publicly, unequivocally washed his hands" of this case.

He said Zuma had been given opportunities to engage in the legal process, but elected not to do so.

Advocate Michelle Le Roux, representing the Council for the Advancement of the South African Constitution, began her argument by saying South Africans were watching the more than eight-hour proceedings, asking whether the court would change its mind.

She asked what it would mean for the rule of law if the apex court changed its mind.

Le Roux said not only was the case testing the Constitution, but it was also testing the country's commitment to the rule of law.

She added that, when the court writes its judgment, it would be forced to answer whether rescission only applied to Zuma, and asked how would it mitigate the risk of every "losing litigant" being invited to come back.

She also said the court "created confusion" by agreeing to hear the matter.

He said the Constitutional Court, in law, could rescind its decision, provided certain requirements were met.

Zuma filed the application on June 2, shortly after the court ordered he had a matter of days to hand himself over to police to start serving his jail term.

He has given three reasons why he did not heed the calls to attend the state capture inquiry proceedings.

His reasons include that he did not participate in the contempt proceedings for medical reasons, he lacked financial resources and because he had sought the recusal of the chairperson of the inquiry, DCJ Raymond Zondo. He accordingly felt his abstention was reasonable, "notwithstanding that it was at odds with the order made by the Constitutional Court compelling him to attend".

Zuma's application is being heard virtually as he is behind bars after handing himself over to authorities on Wednesday night.

The Helen Suzman Foundation (HSF) has added its voice to the matter, joining as a friend of the court. In its papers, it labelled Zuma’s latest court action as "another attempt by Zuma to make a mockery of legal process and the judiciary".

The foundation has submitted that Zuma has failed to meet the requirements for a rescission application, and that there was no patent error or omission in the order granted by the court.

Judgement has been reserved.

Twitter
More in this category: « ANC condemn violent protests and sends delegation to KZN to ease tensions. Livestream:President Cyril Ramaphosa addresses the nation on civil unrest. »
back to top