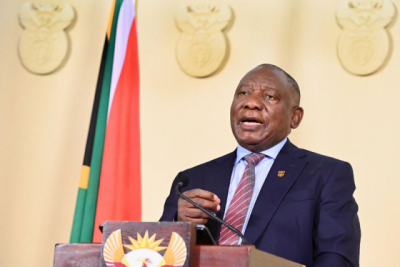 President Cyril Ramaphosa has announced that government will deploy the South African Defence Force and bolster security measures to end violent riots and looting in the country.

In a national address this evening Ramaphosa said that the past weekend has seen acts of public violence rarely seen in the history of South Africa’s democracy.

Property has been destroyed, shops have been looted, citizens threatened, and people have died, he said.

Despite these arrests, Ramaphosa said that this violence has continued in these areas and threatens to spill over to provinces.

"While these actions may have originated from political or ethnic agitating, this has since become opportunistic acts of criminality as a cover for looting and theft," he said.

He added that the country faces food and medical insecurity because of these acts, while the country’s Covid-19 vaccination efforts have been disrupted.

To put a stop to the rampant looting and rioting, the president said that new security measures will be introduced, including:

"Let me be clear: we will take action to protect every person in this country against the threat of violence, intimidation, theft and looting. We will not hesitate to arrest and prosecute those who perpetrate these actions and will ensure that they face the full might of our law.

"We will restore calm and order so that we can get on with the task of rebuilding this country and creating a better life for its people."

The address comes a day after Ramaphosa announced an extension of South Africa’s adjusted level 4 lockdown restrictions by another 14 days.