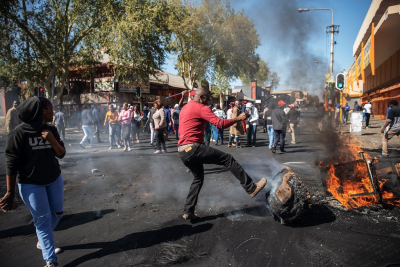 The National Joint Operational and Intelligence Structure (NatJOINTS) confirmed as of the evening of 12 July at 8pm, a total of 489 people have been arrested,with at least 10 people now confirmed dead.

In KwaZulu-Natal, 166 arrests were made, and 323 in Gauteng. In a statement released on Tuesday, NatJOINTS said it welcomed the deployment of the South African National Defence Force (SANDF).

Armed forces were deployed by President Cyril Ramaphosa on 12 July 2021, in support of the operations of the South African Police Service following the acts of violence and intimidation seen in the country.

Ramaphosa vowed to restore order to South Africa and confirmed the SANDF had commenced with pre-deployment processes and procedures to support police operations in KwaZulu-Natal and Gauteng.

The president also said the nation mourned the deaths of those 10 people.

"I speak of the families of Nkosikhona Chiza, Ndumiso Shezi, Khaya Mkhize, Zethembe Ndwandwe, Lindani Bhengu and Lindokuhle Gumede in Gauteng. I speak of the families of Bhekani Ndlovu, Themba Mthembu, Aphiwe Gama and Cebo Dlamini in KwaZulu-Natal. Even as we know the high cost of this violence to property, to livelihoods and to businesses, the loss of human life is the greatest cost of all."

The NatJOINTS now intensified deployments in all the affected areas in KwaZulu-Natal and Gauteng as well, which will be augmented by the SAPS’s measures already being put in place, such as calling up operational members from rest days.

"The continuation of the sporadic violent protests throughout the day and night have resulted in the increase in the number of fatalities, with three in KZN and six in GP" the statement mentioned.

Ramaphosa wished the injured SAPS members a speedy recovery: "We extend our best wishes for a speedy recovery to the four SAPS members injured during this violence: Constable Sangweni, who was shot and injured in Alexandra; his two colleagues, Sergeant Maraheni and Lieutenant Colonel Nefolovhodwe, who were hit with bricks; and Constable Seloane, who was shot and injured in Daveyton."