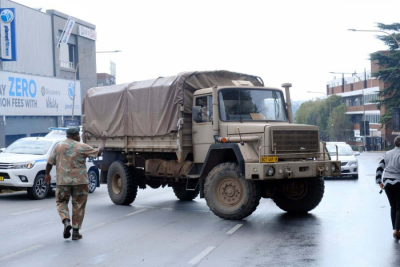 President Cyril Ramaphosa has approved the deployment of 2,500 members of the South African National Defence Force (SANDF) in response to the country’s violent riots and looting.

In a government gazette published on Monday (12 July),  defence and military veterans minister Nosiviwe Noluthando Mapisa-Nqakula said that the deployed SANDF members will work in cooperation with the South African Police Service for the ‘prevention and combating of crime and maintenance and preservation of law and order in the Republic of South Africa’.

This will be known as ‘Operation Prosper’ and the deployment will take place from 12 July 2021 until 12 October 2021. Mapisa-Nqakula and the rest of South Africa’s security cluster ministers are expected to give a briefing on the operation later today.

In a national address on Monday evening (12 July), Ramaphosa announced a number of other measures that government will introduce to tackle the looting, including increased police capacity and private sector partnerships.

Despite these arrests, Ramaphosa said that this violence has continued in these areas and threatens to spill over to provinces.

"While these actions may have originated from political or ethnic agitating, this has since become opportunistic acts of criminality as a cover for looting and theft," he said.

He added that the country faces food and medical insecurity because of these acts, while the country’s Covid-19 vaccination efforts have been disrupted.

"Let me be clear: we will take action to protect every person in this country against the threat of violence, intimidation, theft and looting. We will not hesitate to arrest and prosecute those who perpetrate these actions and will ensure that they face the full might of our law.

"We will restore calm and order so that we can get on with the task of rebuilding this country and creating a better life for its people."

Twitter
More in this category: « 489 people arrested in Gauteng and KZN,death toll now at 10. Livestream:Security cluster briefing on SANDF deployment. »
back to top